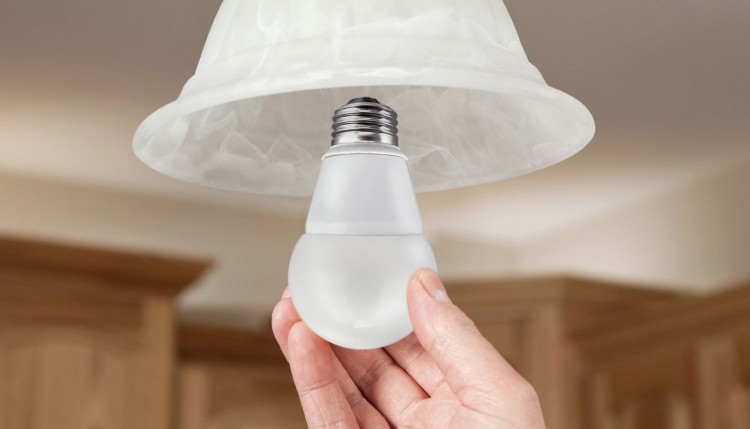 4 resolutions to save energy this year

This post is sponsored by Choose Energy, an online marketplace where you can compare rates from electricity and natural gas suppliers.

I’m a bundle of good intentions. I’ve got so many New Year’s resolutions I can barely keep them straight. My phone alarm now goes off nightly at 8:45pm, reminding me to either exercise or practice Spanish for at least 15 minutes (a more coordinated person might do both at once). I’m saving for like three different goals, from vacations to our upcoming bathroom remodel. And I’m planning to build a coffee table and a shoe rack among other things.

Another resolution I’d like to add is to use less energy at home, and to pay less for it, too. So here’s a season-by-season guide to spending less on electricity this year:

As you’re no doubt painfully aware, the sun goes down earlier in winter. Like before-you-leave-work early. That means we use our lights more — hours more each day in December and January.

If you’ve still got traditional incandescent bulbs in any of your light fixtures, winter is the time to switch them out. Replacing a 60-watt incandescent bulb with an equivalent LED bulb can save you more than $100 over a lifetime of average use, because the LED bulb uses 1/5th of the electricity to produce the same amount of light, and won’t burn out for about 20 years (which means you won’t have to buy a new bulb every 14 months or so).

That means replacing 20 traditional light bulbs with LED bulbs can save you well over $2,000 in the next 20 years — and that’s assuming electric rates stay put, which they won’t. Even replacing just the five most-used bulbs in your house can save you close to $50 a year on your electric bill.

CFL bulbs are also an energy-efficient option, of course — but they have a few big drawbacks. For starters, they take a minute to warm up, so they’re very dim when you first turn them on. (This is infuriating, and particularly awful for a dark basement stairway, I can tell you from experience!) They also contain mercury, which is crazy bad for you, so you need to dispose of them as you would other hazardous household waste — and if you break one, egads!

LED bulbs, meanwhile, last longer than CFLs (20+ years vs. ~7 years), use even less energy (12W vs. 16W), light up at full brightness immediately, contain no mercury, and stay cool to the touch. Some LED bulbs are dimmable as well, whereas CFLs have a terrible time with dimmer switches.

The only real knock on LED bulbs used to be the price: They were far more expensive than incandescent bulbs or even CFLs. But now you can usually pick up an LED bulb for $5 or less.

For example, this six-pack of soft white 60W-equivalent LED bulbs is just 20 bucks on Amazon, or about $3.33 each. They’re similarly cheap at IKEA and Home Depot. You’ll make that money back in your first six months, and you won’t have to change a light bulb for the next decade or two.

Just remember that to mimic an incandescent bulb’s warm, soothing light, you want to get a “soft white” bulb. “Daylight” bulbs give off a cooler, brighter light that feels more akin to a hospital or torture cell if you ask me.

You know I’m a huge advocate of installing solar panels on your house if you’ve got the right roof to do it. Buying them is your best bet (and Massachusetts has a new low-interest Solar Loan available), but leasing will almost always save you money, too, with no upfront cost. And of course, most importantly in my book, you’ll be using less fossil fuel.

What does this have to do with spring? Well, to get the maximum value from your solar panel system, you want your panels installed by spring, since the longest, sunniest days of the year are from May through August.

That’s when you’re going to earn a bunch of credit toward your electric bill — the “net metering” you’ve probably heard about, where you sell your excess electricity back to the utility company and they credit your bill. That way, when you need to buy electricity at night or on a cloudy day in January, it won’t cost you much or anything at all because you’ve already produced enough surplus electricity.

Summer: Cool it on the A/C

We lived for centuries — millenia, in fact! — without air conditioning. Granted, that was before we started cooking the Earth in carbon dioxide and bringing the ocean to a slow boil.

But still, this is Boston: As uncomfortably hot and humid as it gets on a few summer days, it’s not Memphis. Or Mumbai.  People in Europe think our American A/C addiction is legitimately insane — and they’re right.

I despise the heat, and I sweat like a wild boar when the temperature tops 84. People complain about winter here, but if we ever move, it will be to someplace colder.

Still, we only crank the air conditioners on about five to 10 days each summer, when it’s really scorching out. (And even on those hottest days, we’re usually able to turn them off at night.) Most of the time, we get by just fine with this strategy:

This allows the cool nighttime air into the house, and traps it in there most of the day. Even our house — an old, hollow hunk of plaster with like 20+ windows and no insulation — keeps nice and cool until about 3pm on the hottest days. Then we run the A/C during the brunt of late afternoon as the sun streams in like a hot cosmic laser beam through the front porch windows.

This is why you see so many construction workers out there at 7am and wrapping up by 2:30pm — to avoid the hottest part of the day. It’s why people in Spain still take a siesta after lunch. Maybe you thought they were lazy — but they’re just smart!

I work from home, so I’m not making this up — it’s perfectly comfortable. When it’s not, I turn on the A/C for a bit. Better yet, it helps your body naturally adjust to summer — so I’m not quite so miserable when I do have to step outside and walk on the proverbial hot coals of August asphalt.

And for God’s sake, if you insist on nonstop air conditioning — from house to car to work to restaurant to car and back to house — at least set it at something reasonable, like 77 degrees. The U.S. Department of Energy says you can save about 11% on your electric bill just by easing up on the A/C throttle, from 72 to 77; this is one of the simplest ways to save energy in the summer.

We spend all winter complaining about the cold, bundled up in sweaters inside our 70-degree houses. Why then would anyone set their A/C that low when they’re wearing shorts and a t-shirt? It’s summer: It should feel a little bit warm — 76 to 82 degrees is pretty nice. Isn’t that why people go to Hawaii?

Each fall, the big utilities tend to raise their electric rates — sometimes by a lot. National Grid raised its supply rates by 40% this November for the winter season. This is largely because most of our electricity comes from natural gas — and during the winter, natural gas is in higher demand as people use it to heat their homes.

Come summer, the utilities usually lower their rates back down, but usually not ALL the way down. Rates have generally risen about 4% or more a year for the past several years.

So what? Well, Massachusetts is one of about a dozen states that allow homeowners to choose their energy suppliers — so you don’t have to get your power from National Grid or Eversource, even if they’re the ones bringing it to your house.

That means you don’t necessarily have to put up with a huge rate hike each winter, either. There are a lot of competing electricity suppliers out there, and you’re free to choose among them and get a better rate, saving $10-$20 a month or more. You can also lock in a rate for a year or more to avoid any surprise hikes.

Note that some electricity suppliers have used shady tactics in the past, from pushy door-to-door salesmen to teaser rates and fine-print fees. However, sites like ChooseEnergy.com are bringing more transparency to the industry, allowing consumers to compare quotes from multiple vetted energy suppliers at once, with all rates and terms spelled out clearly.

Here’s how it all works. Your electric bill has two components: Your delivery and supply costs. Delivery you’re stuck with — that’s the price you pay National Grid or Eversource to send you electricity over the power lines, and to maintain the grid. However, you’re free to choose who supplies (i.e. produces) that electricity, at what price, and even where or how it’s sourced.

For example, look at our recent electric bill below: Delivery (sometimes called distribution) charges are up top, while the supply charge is beneath that: 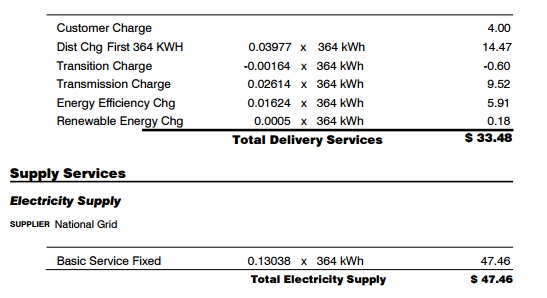 Delivery charges, on top in this recent electric bill, are fixed by your utility. But most Massachusetts residents can change their electric supplier — the bottom portion.

We’re currently paying about 13 cents per kWh for our electricity, on top of about 8 cents per kWh in various distribution fees. The 8 cents we can’t do anything about — but the 13 cents? That we can change.

I decided to see what else was available on Choose Energy, so I entered my ZIP code, monthly usage in kWh (an average figure is about 500 kWh; we use less because our dryer and stove are both gas), and current rate of 13.1 cents per kWh.

Lo and behold, I received a few quotes for about 9.5 to 10 cents per kWh — enough to save us upwards of $10 a month in winter and probably break even in the summer, once National Grid lowers its rates. 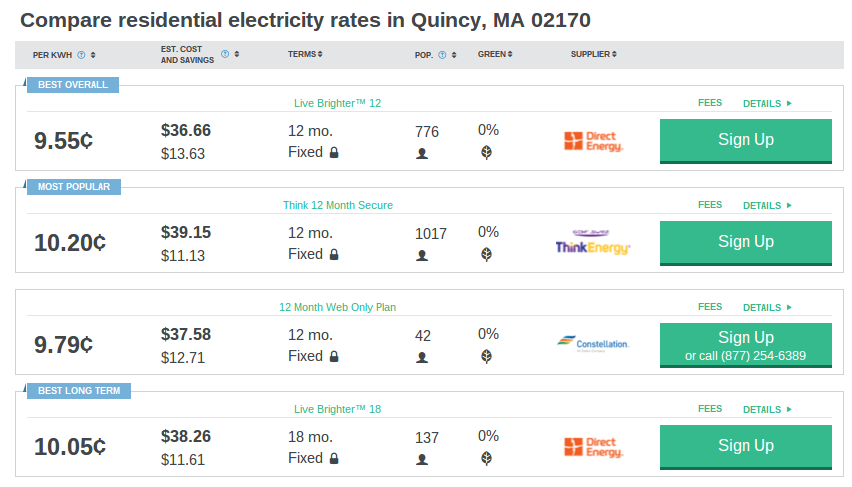 A more wired household could easily save $20 or more per month. And fall is hardly the only time this makes sense. National Grid won’t lower its rates until May, meaning there are still many months of big savings in front of you. And when it comes to virtually any financial decision, shopping around is always a good idea: You might find a fixed, year-round rate that beats even your utility’s lowest summer rate.

Now, it’s important to review all the details: Some plans have nominal monthly fees, variable rates, or short term lengths. All of this is out in the open though, and you can filter your search results by all sorts of variables.

For example, I only wanted to see rates that were fixed for 12 months or longer, because I’m not interested in jockeying my electric service every three months!

I’m realizing now that we’ve actually employed this little regulatory rule to, um… pay more for our bill over the past several years. We’ve always participated in National Grid’s “Green Up” program, where 100% of our electricity supply comes from renewable power sources. For that bit of good karma, we pay a few bucks extra each month.

It turns out you can compare quotes from renewable energy suppliers on Choose Energy as well, including plans that provide 50% or 100% green energy. If we don’t go solar this year, I’ll at least switch to one of these options — saving some money most months, instead of spending more for our altruism:

You can also compare quotes for getting or installing solar power on the Choose Energy site — more on that in a future post.

The important thing to realize is that you have more control over your electric bill than you probably realized, and it’s easier (and less sketchy) than ever to research your options.

Disclosure: I am a member of Choose Energy’s compensated blogger program. However, all opinions expressed here are my own.