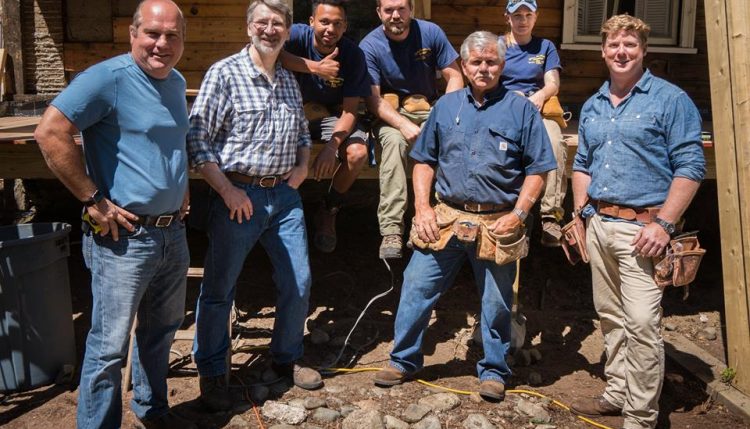 Bonus DIY tips from the set of ‘This Old House’

In December, I got to meet two of my home improvement heroes: Tom Silva and Kevin O’Connor of This Old House. Tom is the show’s longtime general contractor, whose construction know-how (and friendly, patient ability to dumb it down for the rest of us) is the stuff of legend. Kevin is the show’s host, an amiable, amateur DIY’er like you or me (albeit with some pretty skilled friends).

I interviewed them for a Boston Globe story about DIY projects that are harder than you’d expect. Here’s an excerpt from that piece:

When we remodeled our kitchen a few years ago, we wanted to swap out the 1970s hollow-core eyesore with a salvaged wood door we found at a Habitat ReStore. It matched the rest of our 1920 house, and its window grill would let in light from the porch. Because the replacement door was exactly the right size, I foolishly thought I’d just take the old door off its hinges and pop in the new one — like changing a tire.

“How’d that work out for you?’’ cracked Tom Silva, co-owner of Silva Brothers Construction and better known as the longtime general contractor on TV’s “This Old House.’’

The answer: Not great. Chiseling for hinges is precise work with zero margin for error if you want the door to open and close properly. I’d budgeted two hours; the job took me two days. “People don’t understand what goes into a seemingly simple project like that,’’ Silva said. “In most cases, it’s not as simple as you think.’’

Tom and Kevin had so many great stories and seemingly endless DIY wisdom to share. And they were so friendly — pretty much exactly as you see them on TV.

I did my best to maintain composure and take notes while still being present in what was easily one of the highlights of my career. And I tried to avoid coming across like a starstruck fanboy, but I’m not sure I succeeded — I was definitely freaking out inside!

I got to meet them on set while they were filming TOH’s 39th season, the Generation NEXT house in Newton, Mass. (so named for the apprentices that helped out this year). Since not everything fit in that Globe piece, here’s some bonus footage and DIY tips from the interview:

Take a photo first: Kevin says he snaps a photo before taking on a challenging DIY project – it’s like a breadcrumb trail to find your way back if you gets stuck. “The camera phone is my electric lifesaver,” he says. “Take a picture of it. Sometimes I know I’ll chicken out and I want the picture to get back to square one, to the way it was.”

Kevin says electrical work is his DIY nemesis: “I know the basics, I can imagine in my head how a three-way switch is wired to the basement. And then you open up the box and there’s four wires, something else is in there, it’s way past my ability, and now I’m committed — I’ve got the thing opened up, I’m looking at YouTube videos, why do I have these three extras? And often there’s three answers, it could be this, it could be that. For me electric always ends up like that – I’m thinking I‘ll just change that switch or connect to that outlet, and you open it up, and… ugh!”

Tommy still hires out for electrical work: “I know how to wire a house, but I’m not going to mess with it. I know better,” he says. “Leave that to a pro, or you’re going to burn your house down.” (I should mention that, even in person, these two give each other a good-natured hard time just like they do in the show.)

Sometimes it’s worth hiring help: Kevin recalled how he replaced most of the windows in his old Queen Anne Victorian, but he hired a pro to do the first one — because it was January and he couldn’t leave a gaping hole in the wall for a whole weekend as he tried to do it himself. He also said it was worth hiring a crew to install drywall up in the third-floor attic they were finishing. “Anyone can hang drywall — maybe not tape it and mud it,” he said. “But the thought of bringing it up to my third floor and spending the next six weekends doing it myself rather than hiring a crew of four who could do it in four hours? That’s worth a thousand dollars.”

Know your limits and avoid high-stakes jobs: “First, you gotta know your qualifications. The project you pick, make sure you’re comfortable doing it, and if the project you’re thinking about is really stressful and you have a lot of questions, maybe you shouldn’t be doing it,” Tommy said.

“If you don’t know anything about electricity, you don’t touch it. If you know a little bit about electricity, don’t touch it… If you don’t know anything or just a little about plumbing, leave it to a pro, because you want it all to flow in the right direction, and you know what I’m talking about,” he laughed. “If you’ve got a little bit of skills, great, you can definitely do paint, trim work, or anything where you can shut the main off, so if you’ve got a problem you can shut it back off again. Landscaping is extremely forgiving.”

Try a deck: Tommy said building a ground-level deck is a great, gratifying DIY project in that vein. “One of the biggest weekend projects is people who build their own deck. You can build it in two or three weekends and then have friends over and show them, ‘Check it out, I made this!’ You gotta make sure the beams and footings are right, but you can do it if you can read directions.”

Buying the right tool, even if it’s specific to one project, is worth it:  “With dedicated tools, you might think, well, when am I ever going to use it again?” Tommy said. “But you’d be surprised, you might,” noting that DIY home improvement can be a never-ending hobby.

Kevin said buying specific tools saved him thousands of dollars in labor costs. “I have tiling equipment I haven’t used in eight years, but I bought it to tile two bathrooms, and it saved me a fortune,” he said. He was reluctant at first to invest in the big right-angle hog drill that would make it easier to drill through beams while wiring his attic. “It’s a big tool and you’re not going to use it a ton. But when I was drilling those holes for the electric, I said all right, I’m gonna buy it. And not paying an electrical crew to do all that grunt work saved me easily a thousand bucks.”

Buy good tools – and better blades and bits: “You always want to buy a good tool, but also good bits and blades,” Tommy said. “For example, if you get a miter saw you can get a cheap, pretty good, or very good one. A cheap one with a really good blade, the first time you use it, you’re going to say, ‘Wow, this is pretty nice.’ If you try to use a cheap blade in the expensive saw, it’s going to be the opposite: ‘Why did I spend my money on this thing?’ Get a good blade — sharp tools are very important, whether it’s chisel, a hand plane, or a saw, having a sharp tool makes your life easier.”

And about that door: Tom said the ideal tool for installing a door is a plumb bob, not a level, whose bubbles can get slightly off over time. “A plumb bob you can make with a rock and a string. It’s as simple a tool as there is,” he said. It’s basically just a weight tied to a string, and gravity will create a perfectly straight vertical line. “You can drop it off your ladder, toss it off a roof, and it never goes bad. A level, if you drop it and it’s a little bit off, that little bit can hurt you.”