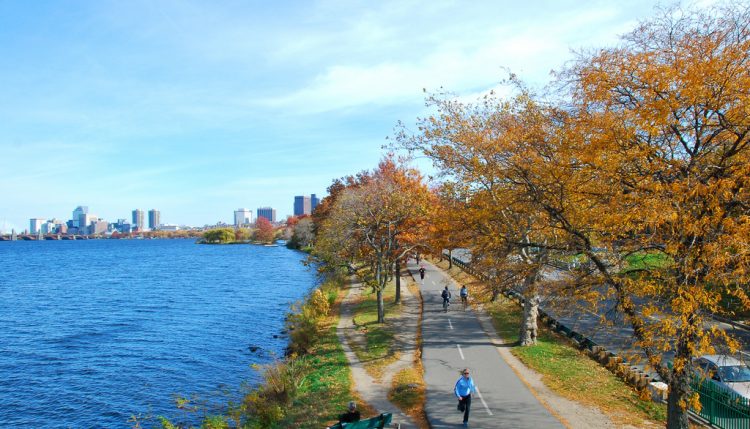 In the past 20 years, I’ve lived and worked all over Boston. Until we bought our house, I rarely stayed at an apartment longer than a year or two, and the nature of the media and publishing industries meant I didn’t stay at any one job too long either.

And in that time, I’ve had some incredibly awful commutes — but also some incredibly nice ones, too. Yes, Boston-area traffic is a logjam of a clusterf**k that crushes dreams like so much roadkill. But if you can get out of the car, it offers some pretty splendid ways to get to and from work.

For example, I just wrote a story for the Boston Globe about people who take a boat to work, riding the waves of Boston Harbor – an option if you live near the year-round MBTA ferry routes serving Hingham, Hull, and Charlestown (and soon, perhaps, Quincy). While I was never lucky enough to have that commute, I’ve had some truly pleasant ones — including no commute at all.

Here are most of the Boston-area commutes I’ve had in the past 20 years, ranked from worst to best:

My first “real” job after college was as an editorial assistant in Needham, and for the first couple of months I was still living at my parents’ house, up in Andover. This meant taking I-93 south to Route 128, through a greatest hits of metrowest traffic jams and cloverleafs.

The whole stop-and-go trip took about an hour each way, and that was way back in 1999, when what we thought of as heavy traffic would today be considered “pretty smooth sailing.”

Plus, I’m sorry, I know many people consider the western suburbs the most desirable towns around Boston for whatever reason, but Route 128 is simply gross and boring. It’s a grotesquely anonymous highway through office parks and suburban mallscapes. At least on I-93 you get to see the city skyline when you get to Medford or even the ocean as you come in from the south. Throw in the fact that, since I worked in a suburban office park, the only exercise I’d get was walking across the parking lot, and this daily grind was the worst commute I ever had.

7. Quincy to Brighton: By Any Means Necessary

I worked at WGBH for three years, which was awesome. But getting there was not. Located near the edge of Watertown, I referred to this area as “rural Brighton,” because until the new Boston Landing commuter rail stop opened up last year, it was an utter ordeal trying to get there by public transit.

I’d take the Red Line from Quincy all the way through Boston and out the other side, then catch one of two buses from Central Square, one of which came more frequently but involved an additional 10-minute walk (a windy and desolate affair over the Mass Pike). If I rode to Harvard, I could catch the 86 bus, which stopped right outside the office — but, like the 66 bus, it’s one of those over-burdened routes where three buses come every half hour instead of one every 10 minutes. And all of those bus routes were winding rides through the back streets of Cambridge, which meant reading — the best part of any public transit commute — would leave me carsick.

Other times I would drive (or carpool with my wife, who would drop me off and continue on to Waltham — talk about a terrible commute). While I-93 chugs along slowly, getting onto it is the problem, and the whole trip was pretty stress-inducing. At 45-50 minutes, it usually took just as long as the walk-subway-bus-walk iteration.

While still working in Needham, I lived in Cambridge, Somerville, and Allston for various intervals. That set up a reverse commute: I drove westbound on the Mass Pike in the morning, and back into the city at night, against the flow of rush hour traffic in each direction. It was also possible to take back roads at times, through Watertown and Newton, which could be relatively peaceful (especially the one summer I carpooled with a coworker and roommate who had a convertible).

Still, on at least one occasion, it took me an hour and a half to get home from barely 10 miles away. If there was a Red Sox game or simply an accident or breakdown, this relatively easy drive could turn into a nightmare — and when that threat exists in the back of your mind, it’s a stress that gnaws at you. And when my car broke down — as it often did in my 20s — it could take me close to two hours to get to Needham using a combination of subway and commuter rail.

When I worked downtown for a few years (at two different jobs) I had a nicely typical commute: Walk 12 minutes to the subway station, and ride the Red Line 20 minutes to Downtown Crossing or Park Street. The walk was brisk and invigorating, offering a little bit of moderate exercise each day. The ride was just long enough to listen to a podcast, read a couple of chapters, or just space out, and offered some nice views of the ocean — in winter, I could watch the sun rise over the Atlantic. And we were far enough out that I could typically get a seat or, at least, get on the train. (Riders trying to board later on would often have to watch, deflated, as the train pulled in with zero room for new passengers.)

Like the reverse commute, however, there was always the threat of something going awry — with each train so jam packed, just one minor delay could easily disrupt the entire rest of the morning. And forget it if there was a disabled train. But on the balance, this was a pretty pleasant, reliable, stress-free commute.

The rickety, squealing trolleys of the Green Line’s B branch are comically slow, and even subject to stop lights, traffic, and other more typically automotive nuisances. And being the B line, there was always the risk of starting your day by stepping in some stray vomit hurled by a college student the night before.

It was a surprisingly long trip — a half hour to my job in the Back Bay, and a full 40-45 minutes to get to Government Center. But for all its faults, the Green Line comes quite frequently, and plugs right along.

The best part of this commute, though — in the days before the MBTA offered apps to tell you when the next train was coming — was that we lived right outside the T stop, at the bottom of a hill. So on frigid or rainy days, I could stand in our living room and just look out the window until I saw the clunky old Green Line pull up at Summit Ave., and then I’d race downstairs and stride right on board.

Two apartments I rented — one in Central Square, and one in Allston — were just a block or two from the Charles River bike path, which allowed me to cycle to work in the Back Bay (about four miles). I love riding a bike, and 95% of this trip was completely free of cars on the protected bike path through the lush Esplanade. I literally couldn’t hold in a grin sometimes as I pedaled along — one morning I even saw a mama duck and her ducklings happily toddling across the path.

What’s more, this routine got me in great shape: It was a built-in, twice-a-day 25-minute workout that I didn’t need to drag myself to any gym to complete. When I got to the office in the morning, I was WIDE awake, and I wanted to drink water, not coffee.

There were only two drawbacks. One was the four or five blocks where I needed to bike in city traffic — taking my life in my hands (in fact, sometimes I’d just walk my bike along the sidewalk rather than ride in the street). And then there was the seasonality of it: In peak summer, I’d arrive to work a sweaty, disgusting mess, and in winter, snow and ice could take it off the table entirely.

For the past few years, I’ve been working from home. It isn’t the best commute I’ve ever had, but it’s pretty darn close: I don’t need to shower or even get dressed to start working. If I want to fit in a bike ride before work, well, I can go for a bike ride down by the beach and then just come back and start working afterward — it’s an option, not a requirement.

But as anyone who works from home can attest, it’s hard to keep a work-life balance when you live at your office. In fact, I’m surprised more workplaces don’t encourage employees to stay at home, simply because I’m way more productive now. Time that would be spent on the subway is time spent working; I log 9- or 10-hour days without feeling exhausted by it. And with the lines between work and home blurred beyond definition, I’m nearly always on duty.

1. Walking the Back Bay

The single best commute I ever had was when my wife and I lived in a Back Bay studio and both worked a few blocks away on Boylston Street. We could roll out of bed at 8:45am and get to work at 9am — or pop back home to cook lunch or even take a midday nap — but we still enjoyed a bit of work-life separation and some physical activity built in to our commute. And it’s not as rare as you might think: Boston is tied with Washington, D.C., as the U.S. city with the most people who walk or bike to work (16.7%).

What’s more, it was a beautiful walk, past brownstones, the Commonwealth Avenue Mall, and landmarks like Trinity Church. And I got to make that walk in the company of my wife – is there a better way to begin and end your workday?

What’s the best commute you’ve ever had — and the worst?