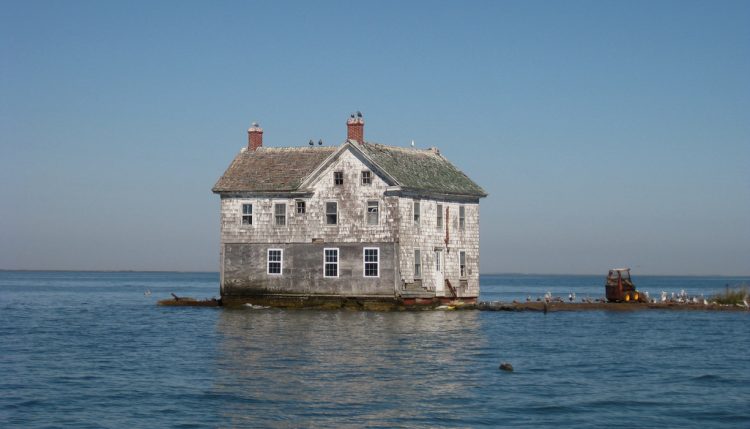 Climate change, flood insurance, and why you should buy on high ground

I always wanted to live by the ocean. That’s why we settled in Quincy almost a decade ago, a few blocks from Wollaston Beach, where we can sometimes smell the sea from the subway platform.

During our house hunt, we researched all kinds of data — pricing, walkability, property taxes, schools, commute times — but one thing we ignored was elevation. Unlike a few other houses we looked at, this one didn’t require flood insurance, and that was good enough for us.

But it turns out, we’re only about 14 feet above sea level on a good day — and the level of that sea keeps rising. It’s got me worried about whether this almost 100-year-old home will make it another 100 years. That’s what prompted me to write a story about house hunting in the age of climate change for the Boston Globe last week.

I worry about our house, sure, and our investment in it, but also about our entire coastal community. Seaside towns all over Massachusetts will face higher high tides, more forceful waves, more powerful storm surges, increased precipitation, and more frequent flooding in the coming decades. Boston Harbor could rise three to seven feet by the end of this century, according to projections by Climate Ready Boston, and rising sea levels mean any given storm will cause more flooding in the future than it would today. Routine flooding would threaten $80 billion of real estate in Boston alone.

And that’s just the stuff we can predict. “Because human-caused warming is happening at such a fast rate, we’re essentially destabilizing the climate, so we get unexpected impacts, like a deep freeze as far south as Texas,” said Ellen Douglas, associate professor of hydrology at University of Massachusetts Boston, who worked on the Climate Ready Boston report. “The climate doesn’t respond in a linear manner,” she added, because feedback loops amplify the effects of warming: For example, warmer winters lead to less snowpack, which means more heat is absorbed by land, leading to even more warming. “By the end of the century, if we follow the highest emissions scenario, [Boston] could see as many as 90 days above 90 degrees Fahrenheit,” Douglas said.

Prolonged and hotter heat waves are my personal hellish nightmare. But anyway, it’s unsettling to think the ocean might erode not just our beautiful beaches, but also our property values and home equity.

“Any area on the coast is going to be threatened, as they have built their communities around the existing conditions – all of which are getting worse,” said Paul Kirshen, academic director of the Sustainable Solutions Lab at UMass Boston, who also worked on the report. But it’s not just coastal communities who have to worry about this. Heat waves, more intense precipitation, and inland flooding are all expected to get worse, too. “While river and ocean flooding may be more dramatic, at least for now it’s relatively rare,” Kirshen said. “[But] local flooding from poor drainage from excessive rainfall is a lot more frequent now, and will only get worse as extreme rainfall increases as the climate changes.”

In short, a lot of us will need to get more familiar with FEMA’s Federal Flood Insurance Program at the very least.

All about FEMA flood insurance

Before we continue, here’s a quick primer on flood insurance:

So, to recap: Flood insurance is an expensive pain in the neck, and coastal communities are in a bit of a precarious spot as the ocean continues to rise around them. And yet, Nela Richardson, chief economist at national real estate brokerage Redfin, told me that home buyers just aren’t thinking about climate change in their home searches. If anything, she said, they’re buying up waterfront and flood-prone properties with reckless abandon and paying a premium for it.

“The flood insurance is viewed as an annoyance or a cost, and there’s still not a widespread psychology that the reason for the insurance is because of the risk, and that the risk is growing because of climate change,” Richardson said.

Jim McGue, owner/broker at Granite Group Realty in Quincy, said buyers are in such a weak position in this hot market that they can’t afford to worry about it. “Three years ago, people would snub their nose at a flood insurance house,” he told me. But now, there are so few homes for sale that it’s just one more concession buyers are willing to make, like waiving their right to a home inspection.

Indeed, in a recent Redfin survey of home buyers, only 9% said they avoided coastal or low-lying areas, and 13% said they were leery of waterfront property. However, a full 30% said they were looking to buy an eco-friendly home — which seems to indicate that buyers are concerned about climate change on a grand scale, but don’t consider themselves all that vulnerable to it.

What could change that, Richardson said, is a series of destructive storms. “But we’ve seen it with Hurricane Sandy and other really devastating storms, that after a few years the developers come back and build in those same risky areas,” she said.

Because it’s subsidized by the government, FEMA’s flood insurance program is politically fraught. Studies have even shown that the program encourages people to live and build in high-risk areas at the expense of other taxpayers.

“Historically, there wasn’t a huge building boom on Cape Cod until flood insurance was introduced,” said Peter MacDonald of Murray & MacDonald Insurance in Falmouth. “Before [that], you couldn’t really build unless you were paying cash, it was too risky. But once you had flood insurance, the banks would say, ‘Yeah, we can lend you money.’”

The program is also insolvent, paying out more than it takes in. A 2012 attempt by Congress to better align flood insurance rates with the underlying risks met with fierce backlash, including from Massachusetts towns who successfully challenged FEMA’s revised flood maps; much of the law was repealed a year later. “People living in floodplains haven’t really been paying the full cost of the flood risk,” said Douglas. “And when insurance companies then have to increase premiums to reflect the full cost of risk, it can be quite a shock — often more than homeowners in these areas can afford. It’s a real conundrum.”

Redfin’s Richardson sees a moral hazard in the subsidies. “There’s kind of an incentive problem. If home buyers and cities and local governments had to completely internalize the actual risks, they might make different choices,” she said. “But as long as government is kind of backing them up, they’re less likely to incorporate the risk of climate change into their home buying decisions.”

So, as pricey as flood insurance is right now, it could (and maybe should) get even more expensive in the future.

But here’s what really freaks me out…

The thing that freaks me out the most, though, is the potential for a massive collapse in local real estate values, or coastal ghost towns that are simply no longer viable places to live. What if my house is okay, but so much of my neighborhood is ravaged by floods that everyone leaves, so there’s not enough people to support the local businesses and they close up, and the whole place basically falls into a state of ruin? Not only would I mourn the loss of my community, but I — or rather, my kid, more likely — would be the proud owner of a house nobody would ever buy.

Last year, Sean Becketti, chief economist at mortgage giant Freddie Mac, warned that climate change could present a bigger threat than the housing crisis. Noting that most homeowner wealth is locked up in home equity, he wrote, “If those homes become uninsurable and unmarketable, the values of the homes will plummet, perhaps to zero. Unlike the [housing crisis], homeowners will have no expectation that the values of their homes will ever recover.’’

What’s more, Becketti said, whole communities may vanish or unravel, and it will be difficult to pin down the timing of such an event — whether home values will deflate gradually as the ocean encroaches, or plunge the first time a nearby home is deemed uninsurable:

“Consider an expensive beachfront house that is highly likely to be submerged eventually, although ‘eventually’ is difficult to pin down and may be a long way off,” he wrote. “Will the value of the house decline gradually as the expected life of the house becomes shorter? Or, alternatively, will the value of the house—and all the houses around it—plunge the first time a lender refuses to make a mortgage on a nearby house or an insurer refuses to issue a homeowner’s policy?”

Climate change solutions in the works

Gratefully, while we can’t expect any help from Washington at present, there are some brilliant thinkers here in Boston trying to grapple with this slow-motion crisis. One idea gaining traction would be to build an enormous sea wall stretching from Deer Island to Hull, or perhaps linking some of the Boston Harbor islands, to even out water levels and reduce the risk of storm and tidal surges for the communities along Boston Harbor.

But there are more localized and less grandiose mitigation efforts to be made as well.

“There’s also a lot of emphasis on green infrastructure and nature based design,” Douglas said. “So rather than doing what we have been doing in the past, which is engineering to block and conquer and constrain natural processes, we’re trying to understand and restore ecological systems and use natural features – like trees, grass, oyster reefs — to reduce the impacts of both urbanization and climate change.”

For example, Douglas said green roofs and vegetation strips along roadways can absorb small to moderate rain events and offer some cooling effects. But there’s a limit to what that type of green infrastructure can do, she said. “It won’t have much of an impact on extreme events, like coastal, river, or stormwater flooding.”

At the micro-level, in terms of your own home search, everyone I spoke to recommended starting with the flood maps. “I would want to be at least 10 to 20 feet above these floodplains,” Kirshen said. (In addition to the FEMA website, you can check the rough elevation of an address using this free, handy map tool.)

“Stay out of the 100-year or 500-year floodplain for sure,” said Douglas, “and take seriously disclosures of past stormwater flooding – I learned this one the hard way. Look for evidence of flooding in basements, like water lines or mold on basement walls, degraded slabs.” Smaller homes are cheaper to heat and cool, and easier to retrofit if necessary, she added.

“Keep track of the local climate changes and be prepared to deal with them – ideally before it becomes a problem,” Kirshen added. “A better maintained house is easier to update than a poorly maintained house. Think small if you can. And keep your insurance up to date.”

Beyond that, throw your support behind local leaders who take climate change seriously and are looking for solutions at the local level. Because not everyone is taking this seriously.

While a clear majority of Americans now accept and even worry about man-made climate change, nearly one in five (19%) is what Gallup describes as a “Cool Skeptic.” That is, they don’t believe global warming is caused by humans, nor that it will pose a threat in their lifetime, and they consider media coverage of climate change to be exaggerated.

That’s disturbing, to be sure. But there is a small silver lining to be found: We’re going to need a few suckers climate deniers willing to buy all this flood-prone real estate one day.