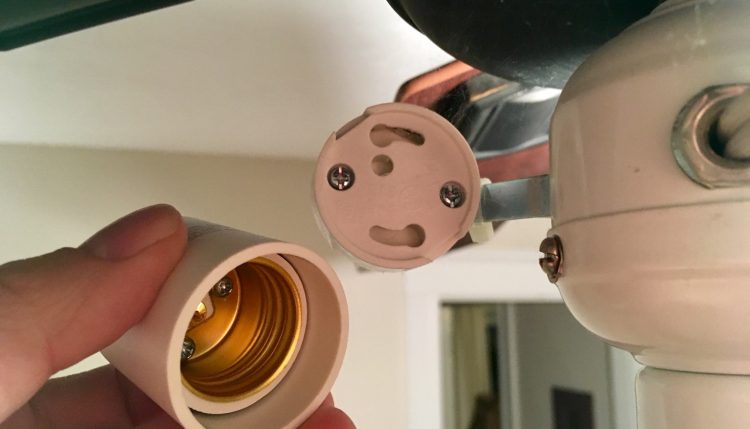 We have a ceiling fan and light fixture that’s slowly grown dimmer as each of its three light bulbs burned out. The first time, I grabbed a new LED bulb out of the closet, unscrewed the lamp, and removed the burned-out bulb — only to find a light bulb with two prongs at the bottom, instead of a normal screw-in bulb.

I didn’t even know these things existed at the time, and certainly didn’t have a replacement handy, so I screwed the lamp back together and just dealt with a slightly dimmer overhead light, with two bulbs burning instead of three. (It’s in a spare bedroom so, hey, who cares.)

When the second bulb burned out, I remembered that we still didn’t have any two-pin bulbs in the house, and just accepted the fact that we’d need to use a desk lamp in that room until I picked up a couple of replacements at Home Depot. By this time, another fixture had a bulb blow out — this one in the pantry — and it too required a two-prong light bulb (called a GU24 bulb).

Where did all these crazy things come from?! Both fixtures were installed not long after we moved in, maybe around 2010 or so. Apparently GU24 bulbs are fairly common in commercial construction and were used a lot during the switchover from incandescent bulbs to more efficient CFLs. Requiring the use of two-pin bulbs was one way to ensure people stopped using cheaper, screw-in incandescent bulbs… by making it basically impossible. (Now, of course, LEDs have gotten a lot cheaper, and are 100% the way to go for soft, bright, dimmable, and immediate low-wattage light.)

Naturally, despite my best intentions, I never did buy any of those two prong bulbs.  I looked (okay, I glanced) but I didn’t find any on the shelves at Home Depot. And finally, the third bulb in our ceiling fan blew last week, so it was utter darkness in the room and time to take action.

Lo and behold, in finally searching Amazon for replacement two prong bulbs, I found a magic little gadget instead: this GU24-E27 adapter.

For under two bucks, this thing fits a two-pronged GU24 socket, but allows you to screw in a regular light bulb (E27 is the standard size) — which, of course, are in plentiful supply at both Home Depot and my linen closet. Problem solved!

Pop the pins in and twist to the right: 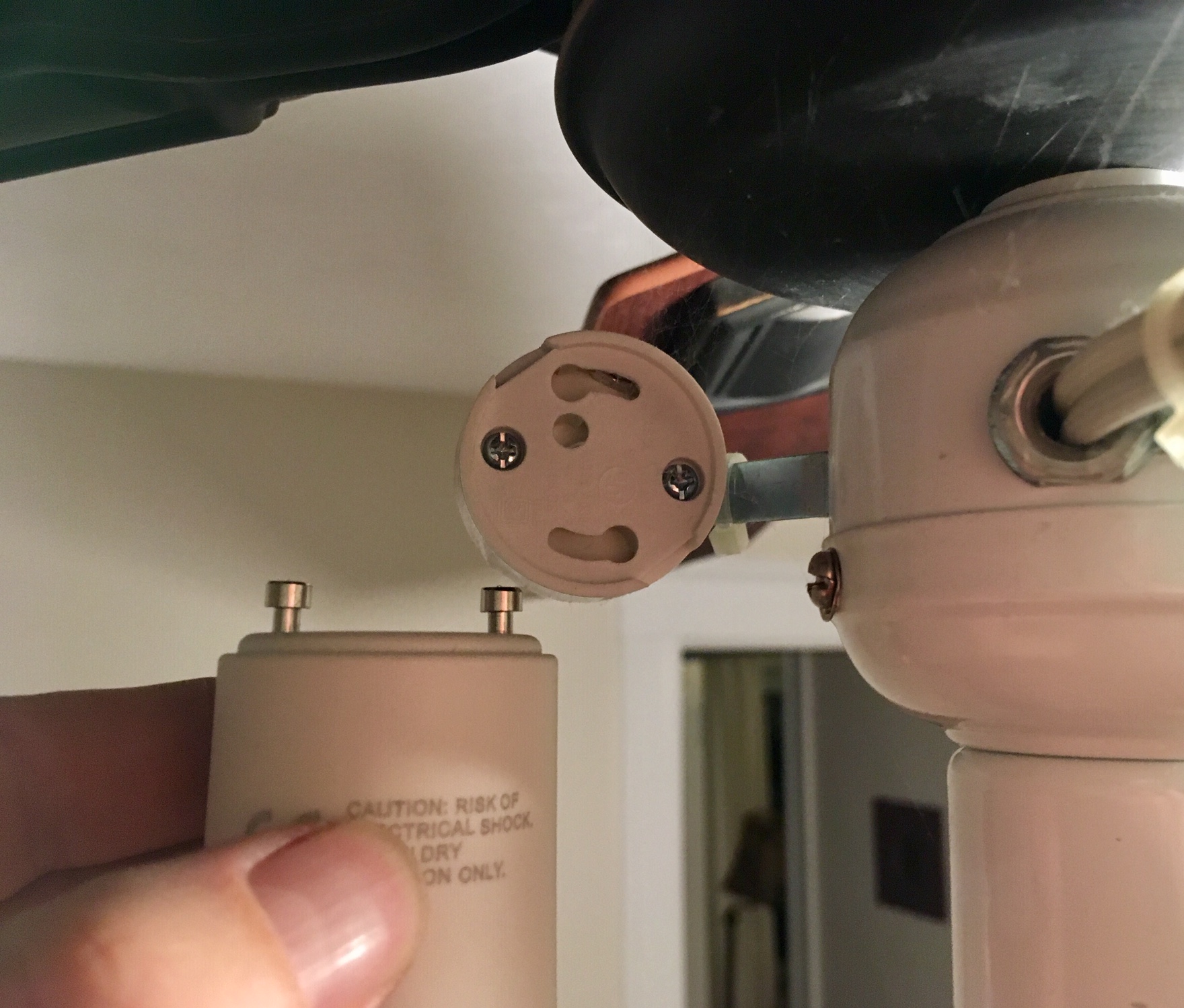 …and then screw in a standard-sized light bulb like you ordinarily would: 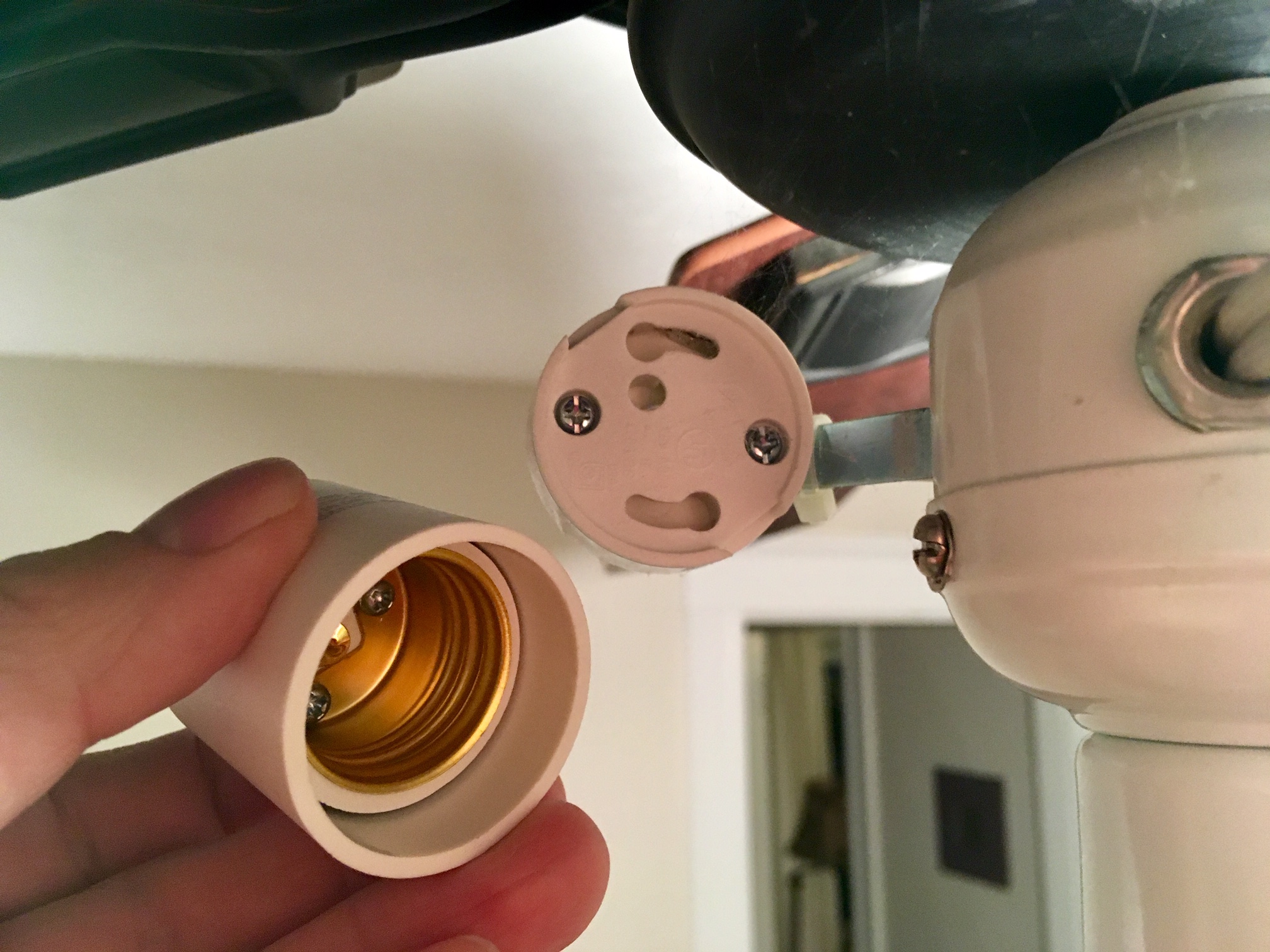 The adapter adds about half an inch in length, but there was still enough room for three of them and three standard LED light bulbs inside the glass bowl of our ceiling fan’s light fixture.

And now I never have to worry about keeping those damn two-pin bulbs on hand again. (Not that I ever did, I guess!)

One note: A fixture designed for a two prong light bulb is not meant to handle a high-wattage incandescent bulb. Only use a GU24 adapter with a low-watt, high efficiency LED or CFL bulb.