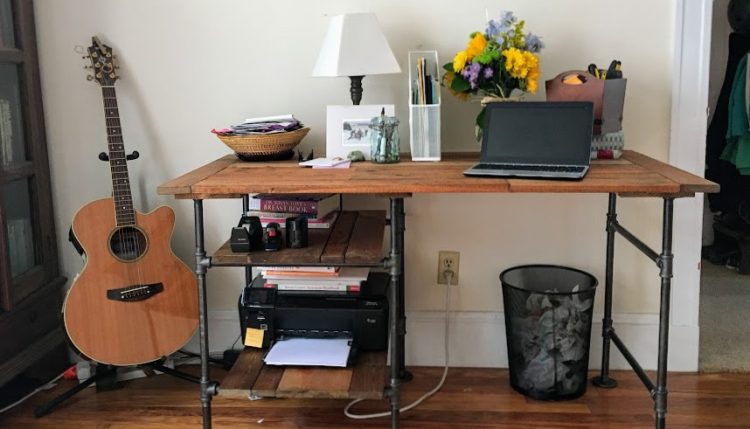 Here at the homestead, we’ve got an underused office/spare bedroom that we’ve been trying to do… well, something with. We did replace our beaten-up, college-era spare bed with an awesome IKEA trundle daybed that’s both pretty and practical. But the weakest link in the room was the cheap, coffee-stained, white laminate particle-board desk we got at Target many years ago.

So, after pulling myself out of a Pinterest vortex, I decided to build a more grown-up DIY desk from reclaimed wood and steel pipe fittings. Here’s how it went.

There are basically two parts to this project: The desktop, made of wood, and the frame, made of pipe fittings, which you simply secure to the desktop with wood screws. I also built two shelves — one for our printer, another for various office junk — which are basically miniature wood desktops.

Besides their industrial look and their slender sturdiness, the real magic of 1/2-inch steel pipe fittings, of course, is that they screw together, making this frame even easier to assemble than your average IKEA project.

The real bummer, though, is that they’re pretty expensive to buy and ship from places like Home Depot or Amazon. After some digging, I found the best prices on black pipe fittings were at SupplyHouse.com. While I can’t vouch for how well their pipes would perform carrying water or gas, they certainly worked great for my purely decorative purposes. (They’re oily when you pull them out of the box, so have a rag handy.)

The desktop, meanwhile, can be as simple or complicated as you want it to be. The simplest way to do this would be to buy a slab of butcher block from IKEA, stain and varnish it, and then screw in the pipe frame.

As it were, I had a whole bunch of 30-inch, 1×4 wood slats from an old IKEA bed frame in the garage, so that was the basis for this project. There weren’t quite enough of them to also make shelves, so I supplemented that stock with another few 1×4 boards left over from other projects. 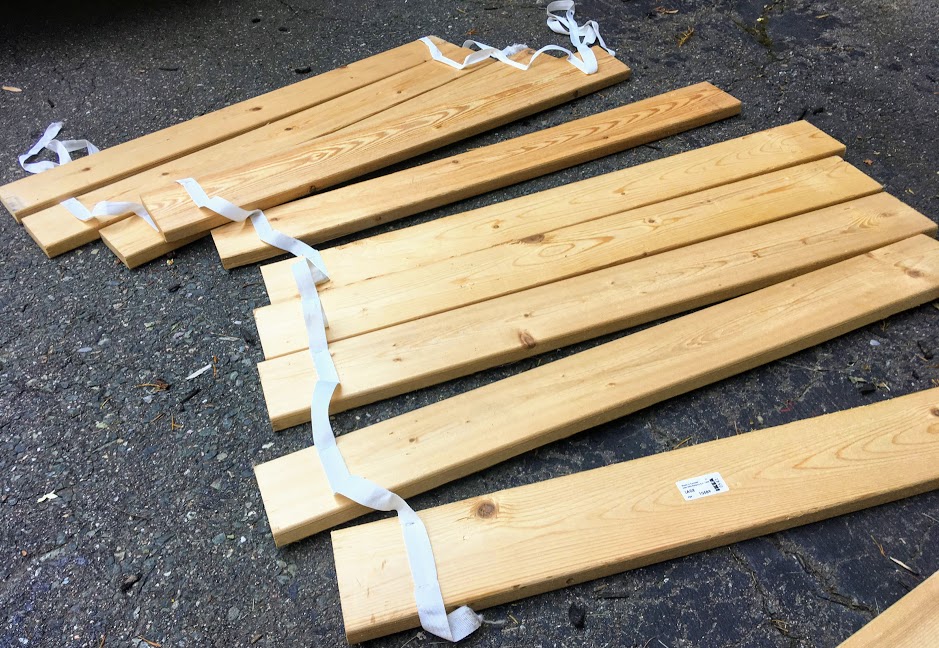 Using many smaller boards gives the desk a real nice look, but it does complicate matters — you have to join a lot of boards at both the ends and at the sides.

If I had to do it over again, I’d probably use just three long 1×8 boards, or at least use full-length 1x4s running parallel to eliminate the need to join them at the ends, which was a pain in the ass.

Now, as you should know by now, I’m not a pro at this stuff. At all. If I were, and if I had the right equipment, I’d probably have run the final desktop through a planer so it’d be perfectly flat. Or at least I’d sand it down way more than I had the patience for.

As it is, the varied planks create ridges and small gaps in the desktop, so you probably wouldn’t want to use it to write or draw without a notebook underneath. But to hold your laptop and office supplies (and printer, down under), and look good doing it? Well, that it can do.

Materials for the desktop

Materials for the steel pipe frame I wanted to keep things simple, so the frame is really just three of the exact same assembly. Two of them run parallel to the desktop on the left half of the desk (forming supports for shelves), while the third runs perpendicular on the right edge.

Start by assembling all six legs:

Then, just connect each pair of legs with 18″ pipe lengths screwed into the tee fittings at the top and bottom. You’ll end up with three assemblies that kind of resemble a capital H, but with two horizontal lines across the middle. Here’s how I sketched it out: 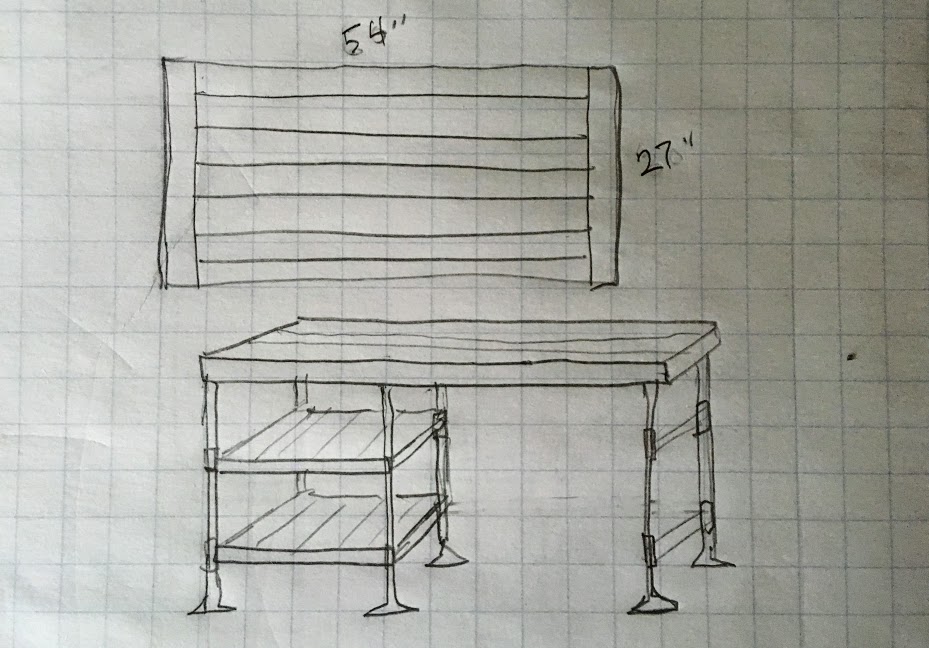 Now, one challenge of working with threaded pipes is that it’s impossible to screw in one side of that 18-inch connecting pipe when the other side is already screwed into something fixed. The workaround for this is to lube the hell out of the pipe threads, screw them as deep as they’ll go on the first side, and then line it up to the other side and basically unscrew it from the first side so it screws into the second side. Stop halfway, so it’s partially screwed in on both sides.

Given that I had a dozen or so boards all cut to 30″ with IKEA precision, I decided to start there (which included tugging the staples out with pliers).

I wanted the final desk to be somewhere in the neighborhood of 54 inches (4.5 feet) by 27″ or so. To achieve that with the boards I had on hand, I cut some of them in half (to make 15-inch lengths) and then I staggered them (like bricks or shingles) between two 1×4 boards running perpendicular on the edges (which measure about 3.5″ wide): 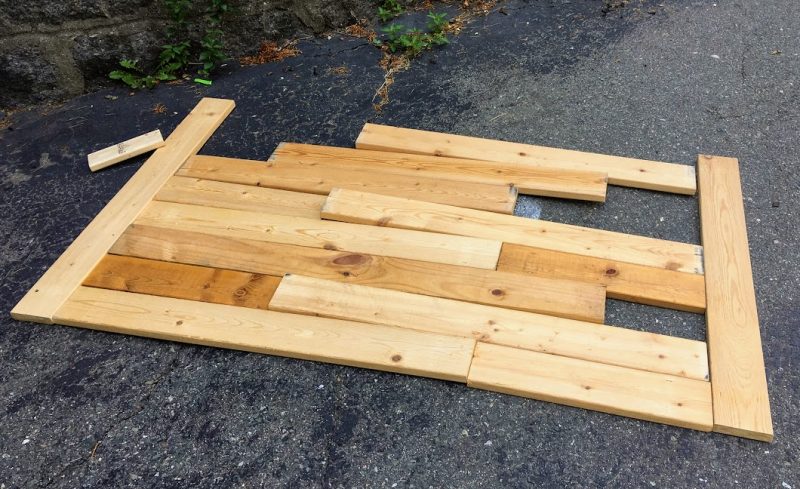 Alternating the 30″ and 15″ boards gives it kind of a nice look, but as I’ve said, I think if I did it over again I’d try to use full 45-inch lengths, and perhaps even wider boards to reduce the amount of joinery required. (Using fewer, wider boards would also make the final desktop smoother for writing.)

Anyway, whatever widths you choose, you want to join your 45-inch lengths together along their side edges. The best way to do this, I think, is with a pocket-hole jig. Use it to drill perfectly angled pilot holes along the underside of the boards, every six inches or so, and then secure each board to the next with wood screws (with some dabs of wood glue in between the board edges for good measure). 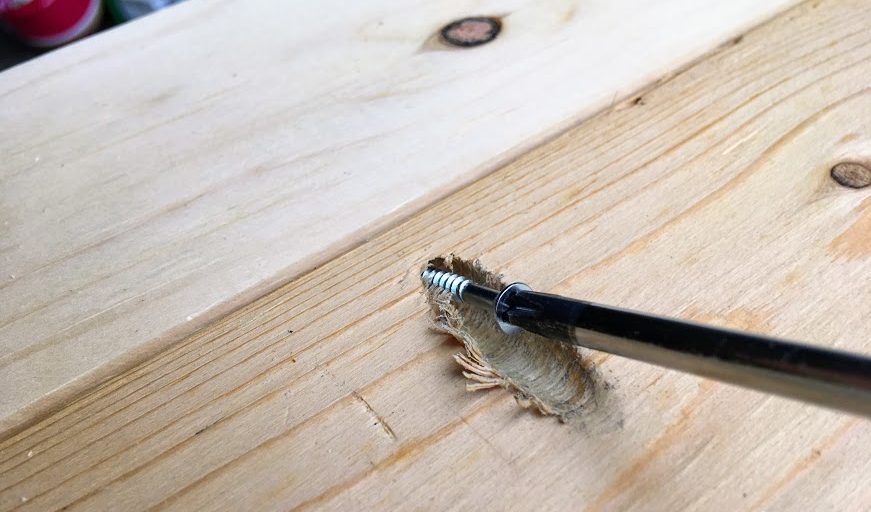 Once all those boards are joined together — and the result may be a little wobbly, that’s ok — make sure the outside edges are perfectly even. If one side is not (mine wasn’t), you can run a circular saw along that edge and trim off 1/8th of an inch or so to get a perfectly flat edge. Clamp a scrap board to use as your straight edge, running the saw right along its edge: 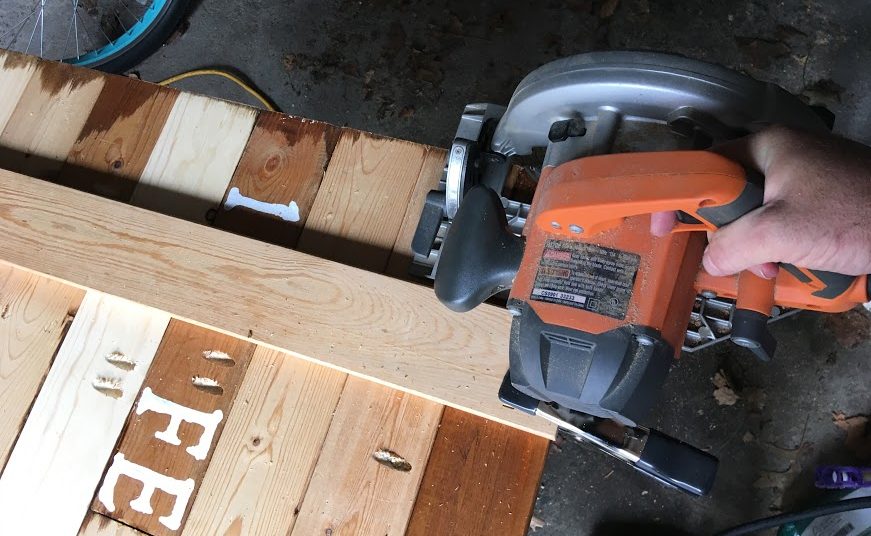 Next, you want to attach the perpendicular edges. Cut the two end boards to size, then attach them using wood glue and pocket holes on the underside.

Finally, for added stability, I added strapping underneath. (You could technically get away with only using strapping, instead of all those pocket holes, especially if you’re using fewer boards. But despite my slacker nature, I did want the thing to be pretty solid.)

With the desktop face down, place the assembled pipe frames where you’ll want them, and mark the positions of each flange. It’s a little over 19″ on center between each leg: 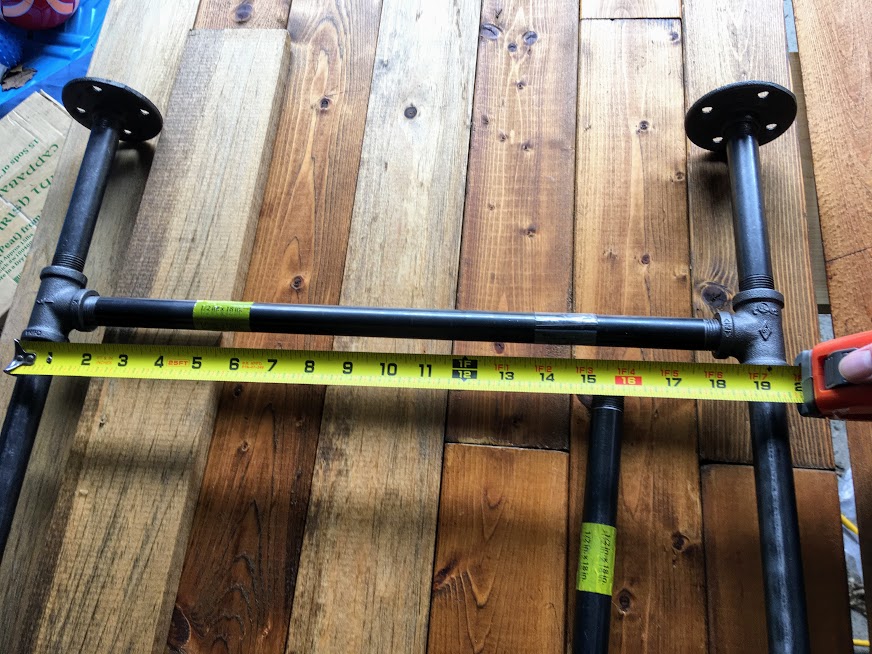 Then cut to size and clamp, with glue underneath, three pieces of strapping (I just used some spare 1×6 scraps) running perpendicular to the main desktop — one near each outside edge, one roughly down the middle — so they cover each flange’s location. Drill half a dozen pilot holes in a staggered pattern, and screw the strapping to the desktop. Here’s what the finished underside looked like (one of my scrap pieces was a failed attempt at a hand-stenciled sign, don’t judge): To make the shelves, which simply rest on top of the pipes (they’re not screwed in), I just used the strapping method. I cut four random boards to an even length, then attached two pieces of scrap wood perpendicularly underneath them, about five inches in from the outer edges — the sides of the strapping boards kind of keep the shelf locked in place.

Now, as eager as you are to get this thing finished, it’s time to sand, stain, and finish the wood. First, sand the surface down as much as you can, smoothing out any lips between the boards or rough spots. I’m not gonna lie, a power orbital sander would be wicked handy here; I don’t have one, though, and elbow grease is an acceptable alternative.

As for the finish, I’m kind of lazy and impatient about this stuff, so I used the one-step option of Watco Dark Walnut Danish Oil, which has a nice staining effect but also soaks deep into the wood to protect it and dries pretty quickly. Danish oil isn’t quite as effective as polyurethane in terms of waterproofing and such, but this isn’t a kitchen counter or dining room table; the worst this desk ought to endure is an occasional coffee spill, hopefully.

Simply brush or wipe on lots of Danish oil, until the wood is saturated, and let it soak in for 15 minutes. Then wipe it all off completely with a dry rag, so there’s no excess. Then repeat the process and let it dry for a couple of hours, and you’re all set.

Put it all together

Now before you screw in the pipe frames, call it day, and revel in your glory, I recommend first moving the desktop and pipe frames separately to whatever room is their ultimate destination. It’s a lot easier to get the individual pieces up stairways and through doorways than it would be with a fully formed 4.5-foot desk.

Once you’ve got everything where you want it, just screw in the pipe framing — start with the frame that runs perpendicular on the outside, and measure twice to make sure the legs are all the same distance in from the edge (I failed a bit in this regard, but no one has noticed): 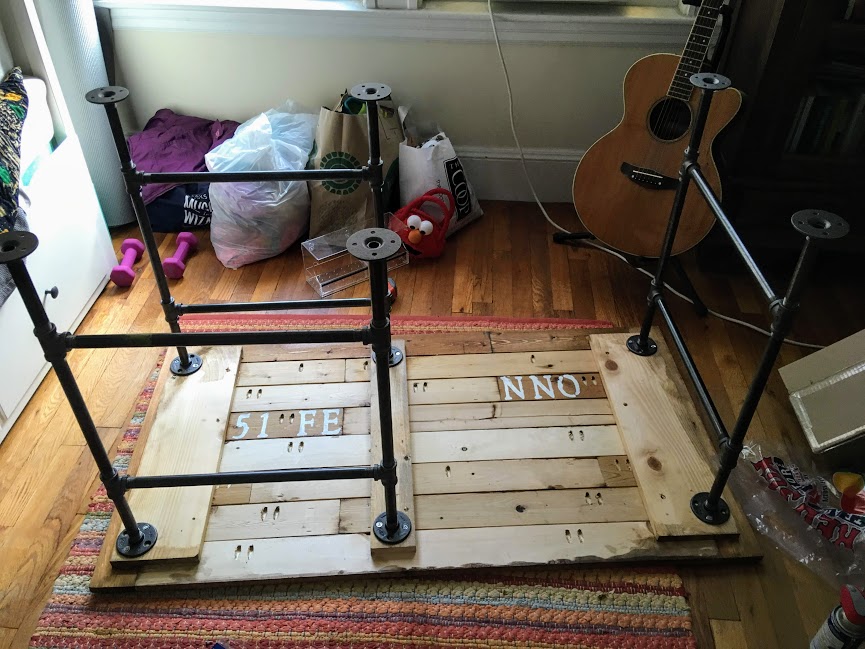 Then flip the thing over, lay the shelves across their supports, and you’re done! 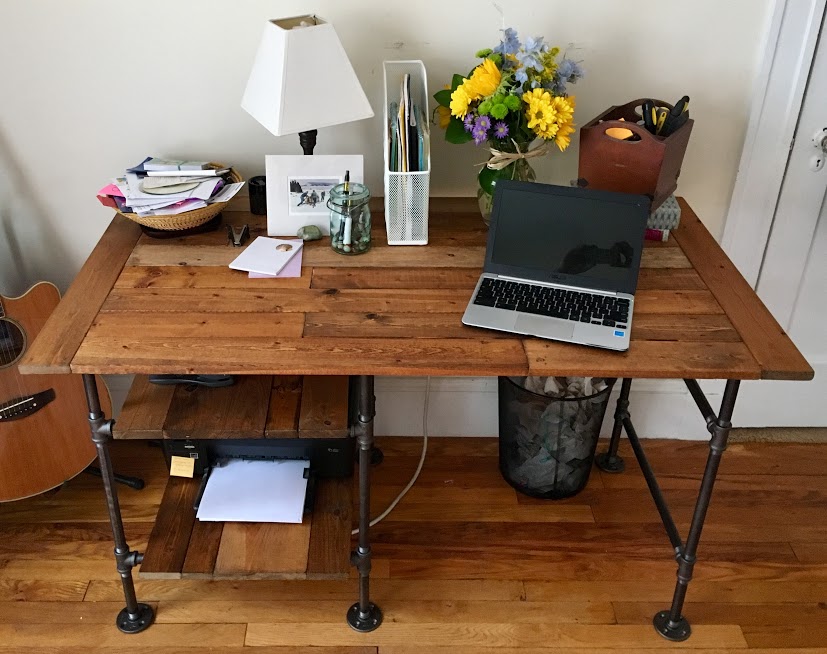