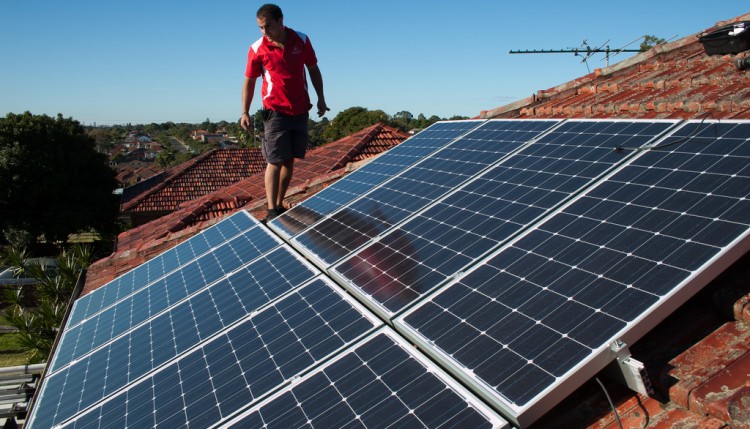 I wish more people (myself included) would do good for good’s sake — and sometimes they do. But by and large, people’s decisions are driven by money and self interest.

This is painfully true when it comes to the environment. Forget, for a moment, that an unfathomable half of Americans don’t even accept the scientific consensus around climate change and think everything’s just fine — that there’s no need to rein in pollutants or carbon emissions, even as sea levels rise and the ocean currents go wonky and storms continue to intensify with deadly consequences. Forget all that.

It’s an uphill battle just getting people to pay more for organic groceries, or to ease up on their air conditioner, or even to take an extra half a second to recycle correctly.

Thankfully, every now and then, the Good Thing to Do is also in your immediate self interest. (I say immediate because doing the right thing is almost always in your long-term best interest.)

Here are three ways you can help your Mother Earth and increase your home’s resale value at the same time. In fact, these home improvements are essentially cost-neutral in the long run and — better yet — may help save us from the fury of the rising seas. Maybe.

Last month I wrote a story for the Globe that asked whether installing rooftop solar panels is worth the cost. After researching that story up and down, I came to a pretty simple conclusion: Hell, yes!

There are so many incentives at play that, if your roof gets good sunlight (a big “if” since the orientation of your home or any towering trees nearby can drastically diminish this), most homeowners have everything to gain by going solar.

In particular, your best bet is to buy the system (or finance it with a low-interest home equity loan or solar loan). The average Mass. homeowner could save about $35,000 over 20 years, according to fairly conservative estimates by EnergySage.com. Leasing a system, which usually comes with zero upfront cost, will still save you some money, but not as much.

That is, no doubt, still a lot of money. But you’ll essentially be getting free, 100% clean energy for the next 20 to 30 years — so a system will pay for itself in about 4-6 years in most cases. After that, you’ve essentially wiped out a $100/month (and rising) utility bill for two decades.

But wait, there’s more! (I swear, being a solar panel salesman is probably the easiest job around right now… the case just about makes itself.) We haven’t even gotten into the boost to your home value. A multi-year, eight-state study by Lawrence Berkeley National Labs found that homes with solar panels installed sold for about $15,000 more than comparable homes without them.

So pay a net $14,000 after incentives… swap your electric bill for a comparable loan payment for a few years, and pay virtually no electric bill once that’s done… save about $35,000 between your wiped out utility bills and SREC income… and on top of all that, boost your home’s value by more than you paid for the system in the first place? (Of course, that boost diminishes after a number of years as the panels get closer to the end of their lifespan.)

But yeah, it’s not a bad deal in my book. We’re pretty close to getting panels installed ourselves, and I’ll let you know how it goes.

If you’re interested in going solar yourself, you can get a handful of quotes online from EnergySage.com; I’ve found it to be a pretty useful and comprehensive resource, and the companies that gave me quotes weren’t pushy at all. 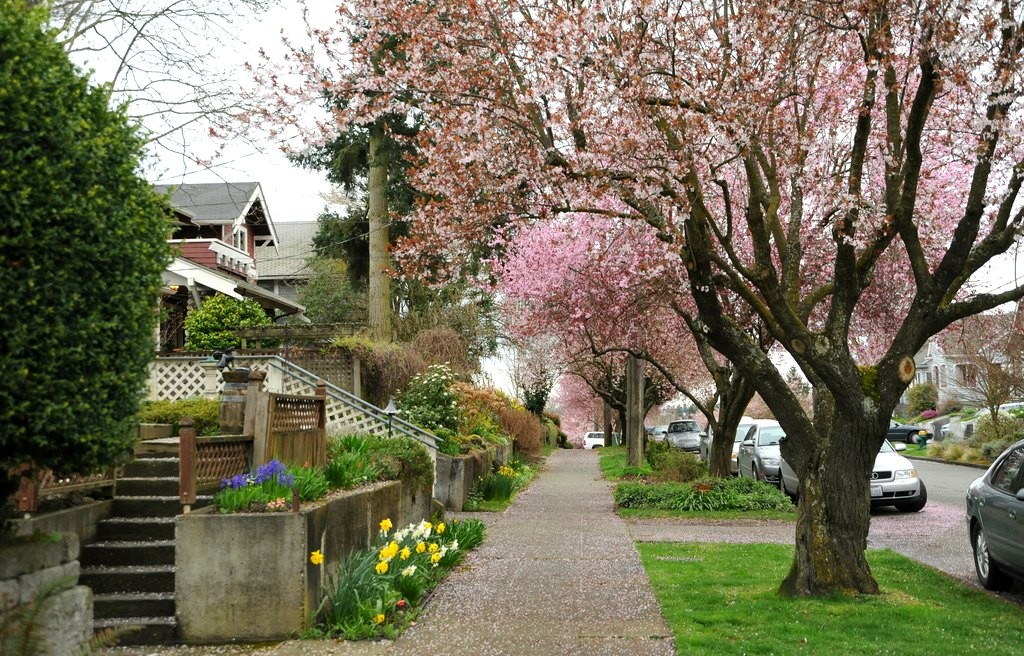 A healthy, mature tree out front can increase your home’s value by about $7,000. (Photo by Wonderlane.)

You wouldn’t think so, what with their leaves falling off, but fall is a perfect time to plant a tree, according to the Arbor Day Foundation. The dormant stage is a fairly low-impact time for transplanting. Here are step-by-step instructions to planting a tree (hot tip: don’t use fertilizer).

Why plant a tree? A bunch of reasons.

They can also lower your energy bills when planted strategically. Plant evergreen trees on the north side of your home to shield it from chilly winter winds. Plant deciduous shade trees on the southwest and southeast sides of your home to shade your home in summer while still letting in the sun’s warm rays in winter (when the leaves fall off). 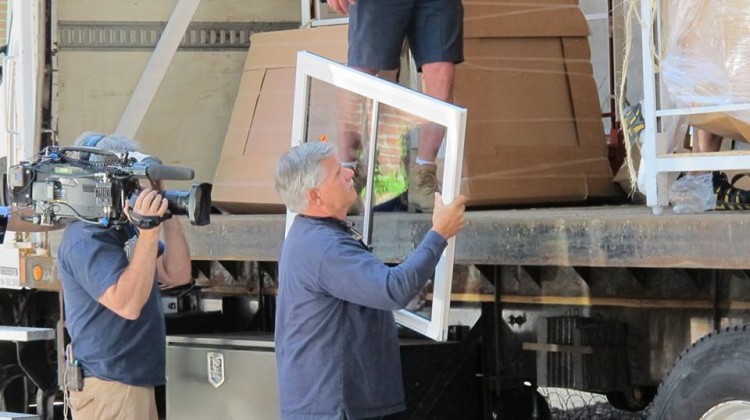 If you’ve got drafty old windows like we did (of the double-hung rope-and-pulley variety), replacing them with high-quality, double-pane vinyl windows can add a nice lift to your home’s resale value and help you use (and spend) a bit less on heating and cooling, too.

Homeowners in Boston who replace single pane windows with EnergyStar-rated double-pane ones will use less fuel to heat and cool their home, saving about $319 a year in energy costs, according to EnergyStar.gov. That’s a nice kickback for both the Earth and your bank account — especially for something that makes your home more comfortable.

It’s not just the energy savings, either —  it can be a major quality of life improvement. Old windows can be sticky and hard (or impossible) to open, or even painted shut. The first few years in our house, our rickety old bedroom windows shook and rattled at a deafening volume on windy winter nights!  And if there’s old lead paint inside the window jamb, you risk kicking up harmful lead dust every time you open and close the window. (Just don’t go replacing gorgeous lead-glass willy-nilly.)

Expect to pay about $400-$600 per window installed if you focus on energy efficiency and not fancy frills. For a home with 15 windows, that’s at least $6,000, meaning your break-even point is still quite a long way off.

But New England homeowners can expect to recoup about 75% of the project cost when installing vinyl replacement windows — or a bump in home value of about $4,320 in our example — according to Remodeling magazine’s 2015 Cost vs. Value report.

H&H Recommendation: We’ve replaced nearly all our windows over the past few years — a few at a time — with nice double-hung, EnergyStar-rated tilt-in Harvey windows, and have used North Shore Window and Siding the last few times with great results.

Note that the popular, one-time $1,500 federal tax credit for energy-efficient upgrades has not been extended, as of this writing.

To replace or restore?

Another option I’d recommend in hindsight (and a cheaper one, if you DIY) is to simply restore your old windows by repairing and improving the rope and pulley assembly, and adding storm windows to make them more energy efficient.

After all, original windows can be beautiful when they’re functioning properly and can easily last hundreds of years if they’re cared for properly — they don’t make them like they used to. (Literally: Pre-1960s or so, windows were made of old-growth wood, which is far denser, rot-resistant, and superior to today’s pine.) Meanwhile, the very best replacement windows won’t last more than 50 years, and most are only guaranteed for 20 years at most.

What’s more, installing low-E storm windows (which are coated with an ultra-thin, invisible layer of metal to reflect heat back into the home), such as the Harvey TruChannel, can be just as effective energy-wise as replacing your windows altogether, yielding up to $330 a year in heat savings, according to Energy.gov.

The Boston Building Resources Center often offers workshops (check their schedule here) on restoring sticky old double-hung windows, and says if you do the work yourself — which is “more tedious than difficult” — you’d be hard pressed to spend more than $50 a window on materials (plus the cost of low-E storm windows, which run about $200 and up).

Other green updates to consider

Of course, those aren’t the only environmentally friendly improvements that can increase your home’s value — they’re just three of most cost-neutral.

If you’ve got an old, inefficient boiler or furnace, there are rebates available and a 0% HEAT Loan program you can take advantage of to replace it. And which house are you going to buy, all things being equal: The one with the rusty, clanky, 30-year-old boiler, or the one with a brand-new, 95% efficient boiler that reduces monthly heating bills?

We’ll cover the HEAT Loan program as well as how to get up to 75% off the cost of insulating your house in our next post about the many ways MassSave can save you a bunch of money this winter.