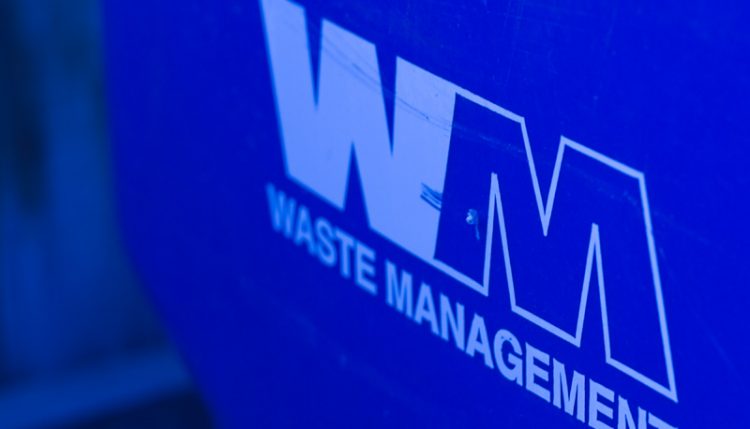 Recycling is the least we can do to to help our ailing planet. It’s not hard. Single-stream (all-in-one bin) recycling has made the process easier than ever for homeowners. And yet, it’s clear a lot of people just don’t know how to recycle properly.

In our neighborhood, I see pesky plastic bags stuffed in blue bins all the time, which are the No. 1 “contaminant” gumming up the works at recycling facilities. At a friend’s house the other night, I spied their newspaper in the recycling bin (good), still wrapped in its plastic bag (noooooo). That ain’t helping, guys!

I recently got to tour a Waste Management recycling facility in Avon, Mass. It was very cool to see the process up close, and I want to share with you some of what I learned there.

By now you’ve probably heard that recycling has gotten more complicated. To be honest, it hasn’t really —it’s just that Americans were pretty lousy at recycling, tossing in all manner of garbage and food and other junk with their cardboard, plastic containers, and glass bottles, and our biggest buyer, China, got tired of taking and processing all that extra waste. So they severely tightened restrictions on how much contamination they’d accept, down to 1%. We had been sending them batches of “recyclables” with an average of 25% non-recyclable muck mixed in.

China’s new policy occurred alongside a dramatic shift in the market for recycled commodities. For example, recycled cardboard fetched $175 a ton in early 2017, but prices dropped below $100 a ton by 2018; it now costs more to process most recycled materials than a company can make selling them.

All of this threw the household recycling industry into a bit of turmoil last year. Companies were suddenly forced to charge communities a lot more money for picking up and processing their recycling (a service municipalities once earned money on, when commodity prices were higher), or, worse, resort to landfilling or incinerating recyclables they couldn’t afford to process.

Yup, for a minute there, some companies were just burying your rinsed-out jars and jugs because it was cheaper than recycling them. (Angry-face emoji.)

And that outrage may still be happening in some communities around the country, but not in Massachusetts (reason No. 3,589 why I love this place). Massachusetts passed a law requiring waste collection companies to actually recycle collected recyclables, even if it would be more cost-effective for them to just bury or burn it.

The whole episode, however, led to some confusion about what can and can’t be recycled as towns tried to cut down their contamination rates. The good news is that it’s working: The plant manager at the Avon recycling facility said that contamination is down to about 9% now — not China-worthy, but acceptable in some other countries, and certainly a lot better than 25%. (And that was after crews and machinery work to separate the glass from the plastic from the paper — which is a fascinating, dizzying dance to watch:)

The other good news is that Massachusetts has standardized its recycling process statewide, so pretty much all of the different collection companies and facilities now adhere to the same guidelines.

And so I present to you this basic guide to recycling in Massachusetts. But if you’re ever in doubt about whether a specific item can or can’t be recycled, just check the state’s “Recyclopedia” at RecycleSmartMA.org.

Do NOT put these in your recycle bin:

For the love of God, people, stop trying to recycle plastic bags, or putting your recyclables IN a plastic bag. This also goes for Zip-Loc bags, Saran Wrap, and other thin plastic films. (Want a reusable alternative to plastic wrap you don’t have to throw away? Try these silicon lids that stretch to fit over a bowl or can, we swear by them! Even better are these reusable silicon bags for sandwiches and snacks.)

Using paper or reusable shopping bags is preferred, of course, but if you do have plastic bags around, they must be recycled separately. (A grocery store will usually have a bin for them — remove any receipts or other stuff first.)

This is super depressing to me, because I’m a cereal nut and we go through a lot of oat milk cartons — none of which, it turns out, is recyclable unless you live in Western Mass. These cartons (same as juice and soup boxes) are typically layered with plastic to keep the products fresh longer, making them too difficult to process at most recycling plants.

There’s a difference between magazines and cardboard and soiled paper towels and napkins. Don’t recycle the latter (though you can compost them). Nor can you recycle tissue paper, gift wrap, parchment paper, or shredded paper.

Ketchup, yogurt, pasta sauce… these are obviously not recyclable materials. So before you toss an empty container in the blue bin, give it a thorough rinse.

This one is crazy. Restaurants like to use black-bottomed take-out containers because they frame the food so nicely and make it pop visually. But the bulk of these black trays use a dye that gums up recycling machines. This means you can recycle the clear plastic top of a take-out tray, just not the black bottom.

The plant manager at Avon told us to be careful when walking around the plant (filled with roaring machinery) and to watch our step, because there were golf balls rolling around over the place. And I was like, what? But I shit you not, he was right — the floor of the plant was littered with debris that can’t be recycled, from random lamps to cords and metal chains (which tangle in the machines) to, yes, a whole bunch of golf balls.

You can’t recycle golf balls, but you can send (or even sell) them to a place that will refurbish and resell them. Same goes for clothing, cutlery, and other household items, even if they’re made of recyclable material (like drinking glasses or a stainless steel pot, for example — not recyclable).

❌ Anything you’re unsure about

It might feel good and ease your conscience to think you’re recycling stuff instead of adding to a landfill, but “aspirational recycling” is part of what got us into this mess. So if you’re not 100% sure that something ought to be in the blue bin, it’s better to just leave it out — otherwise you risk tainting all the stuff that actually CAN be recycled.

DO recycle these things:

Newspapers, magazines, junk mail, cardboard, boxes, paperback books, and your kid’s old homework are all very much still recyclable. Even empty pizza boxes with some grease are ok (but not the wax paper liner or the little plastic stand inside).

Glass remains one of the easiest materials to recycle, although apparently a lot of our crushed recycled glass now ends up getting used in roadways. Glass jars, bottles, and other glass containers should all be rinsed out and recycled. Remove, rinse, and recycle metal lids for extra credit.

Definitely recycle metal food and beverage cans, from cans of vegetables and cat food tins to aluminum soda and beer cans. Clean aluminum foil and even disposable aluminum baking pans can be recycled, too.

Plastic is where things get complicated, and even the little number inside the recycle symbol isn’t always a reliable indicator of whether something can or can’t be recycled. But you can definitely recycle clean plastic bottles (e.g., soda and water bottles, ketchup, mustard), jars (e.g., mayonnaise, peanut butter), jugs (e.g., milk, orange juice, laundry detergent), and tubs (butter, yogurt, cream cheese). Rinsed plastic soap and shampoo containers can be recycled, too, as can those clear plastic clamshell salad and berry containers.

Here’s a handy infographic from RecycleSmartMA.org to sum it all up: 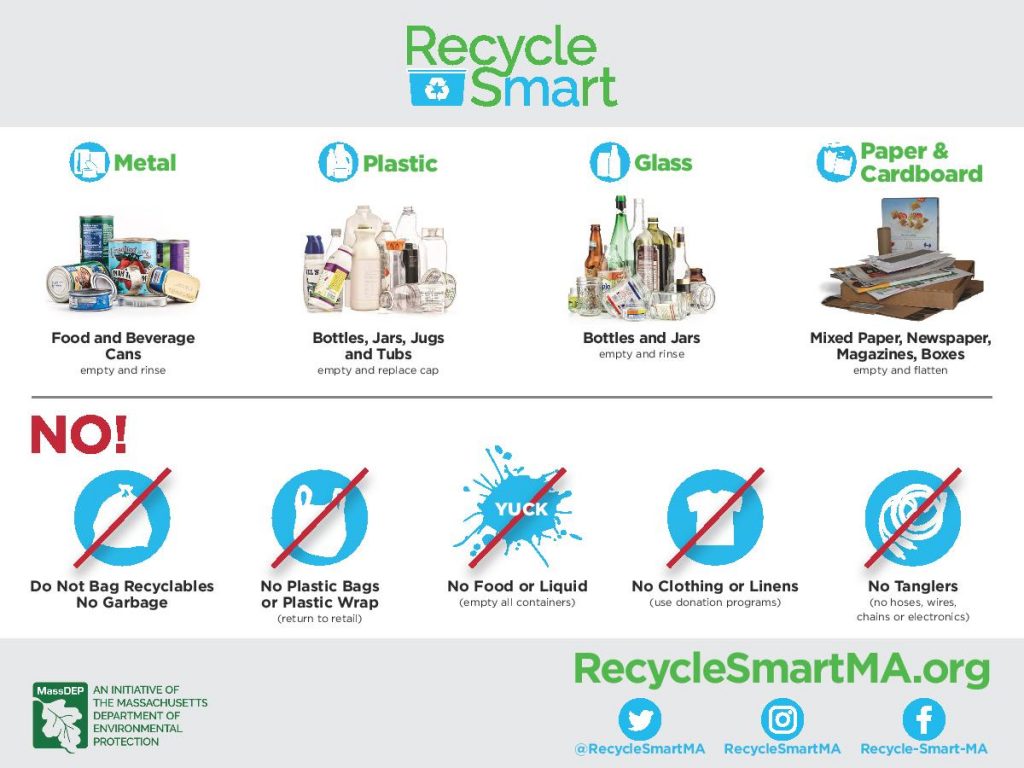 There’s a reason recycling appears last in the old mantra, “Reduce, reuse, recycle.” Recycling is great — and again, literally the least we can do — but it alone can’t save us.

On that tour of the recycling plant, we saw a number of giant bales of crushed plastic water bottles. Each was taller than me and wider than my arms outstretched, containing thousands of flattened, clear bottles. There were about 20 of these giant bundles lined up, and someone in our group asked how long it took the plant to accumulate all of them.

The plant director replied that this haul — these 20 giant blocks of crushed plastic bottles — was just a single day’s worth.

That’s just the plastic bottles that got recycled (about 70% end up in the trash or oceans), just in our little corner of Massachusetts, in just one day.

Recycling is a must. Please take two seconds to do it correctly. But remember that the only real, long-term way out of our environmental mess is to use less in the first place. 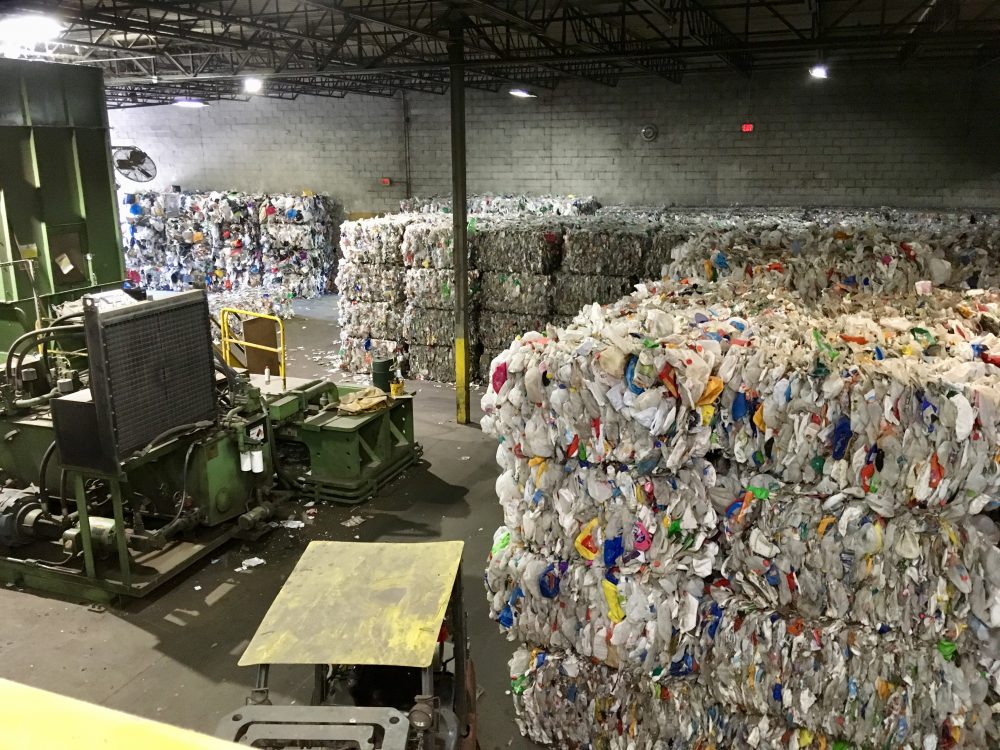 This was plastic jugs, like milk containers. There was another whole batch of plastic water and soda bottles. And this is just the stuff that makes it to the recycling center in our little corner of the world.

Looking for a cooler place to live (literally)