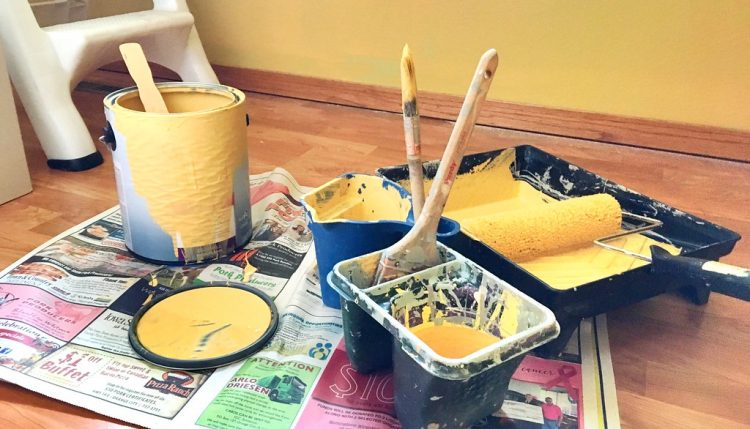 I recently wrote an article about sourcing healthier home materials — and I learned a whole bunch of scary stuff in the process. Your home is supposed to be a sanctuary, but a lot of the materials, finishes, and furniture in our living spaces contain some pretty bad stuff.

The Globe article focused largely on building products and finishes — to sum it up too quickly:

But I wanted to share some other stuff I learned that didn’t make it into the article — because modern life is full of crazy chemicals, and I’m now on a mission to get some of them out of our house and out of our lives.

One of the most immediate, urgent changes I made after researching this article was to get a cast-iron skillet to replace the nonstick frying pans I’ve been using for… basically forever.

The chemical compounds used to make Teflon — that magically slippery surface we know and love — are wicked toxic. “If you overheat your Teflon pan and you have a bird in the kitchen, it may die,” said Liz Harriman, deputy director of the Toxics Use Reduction Institute (TURI) at UMass Lowell.

It’s a condition known as polymer fume fever. Birds are more sensitive to the vapors than we are, but still—when you’re cooking dinner each night, do you want to breath air that can literally kill a bird? It’s similar to how canaries were used to detect dangerous conditions in coal mines: If the canary died, it was time to get the hell out of there.

(Reminder: Never use a metal utensil to stir or serve food from a nonstick pot or pan — not just because it will scratch the nonstick surface, but more importantly, because flakes of that material will get into your food and basically remain inside your body for a looooong time.)

“We have for more than 50 years now been using these highly fluorinated chemicals like Teflon and Scotchgard, and they’re incredibly effective water and stain repellents,” Harriman said. But they’re also highly toxic and linked to cancer and other diseases. “They work really well, but eventually they all break down into these chemicals, per- and poly-fluorinated substances, which never go away in the environment and cause problems with endocrine systems.”

Endocrine disruptors are particularly worrisome because they mimic hormones in our bodies, so even very small exposures at crucial developmental stages can trigger physiological reactions, said Bill Walsh, founder of the Healthy Building Network.

Found in flame retardant fabrics and curtains, furniture foam, rugs and carpet padding, and other household items, endocrine disruptors are associated with thyroid and reproductive problems, among many other issues.

Higher-end home stores like Crate & Barrel have been selling safer furnishings for a long time, and gratefully, the most toxic flame retardants are now being phased out of the marketplace. Nervous companies are changing their stain-repellent formulas as well—even DuPont has tweaked its formula for Teflon slightly.

But, said Walsh, there’s no guarantee that the newer formulations will be any safer in the long run. “Until definite proof of harm is found based on consumer complaints or people getting sick, the chemicals are presumed innocent until they’re proven guilty, and it really should be the other way around,” he said.

Another reason to limit your use of chemicals in the home, Walsh said, is that it’s unclear how they react with each other in your body over time. “No safety calculations ever take into account multiple chemical exposures,” he said.

Most regulations only concern the safety of one chemical or product at a time, when in reality a homeowner might be painting a bedroom, cleaning the bathroom, and spraying foam insulation in the attic or basement on the same Saturday.

And while Walsh is talking about unstudied, long-term hazards as opposed to acute risks, one has only to recall how a reaction between bleach- and acid-based cleaners created noxious fumes that killed a restaurant manager at Buffalo Wild Wings in Burlington last month to grasp the concept.

Chemicals are just one of the problematic things we’re inhaling at home, as BIll Hayward, founder of HaywardScore.com, told me. The air in our homes is up to five times more polluted than the air outdoors (which ain’t exactly pristine these days, either), as pollutants get trapped inside.

One reason for that is because air currents in most homes suck in air through contaminated pathways — through garages (where we might store weed killer, motor oil, and old paint cans), through basements (where you’ll find oil tanks, cleaning products, and maybe mold), and through walls (which could contain just about anything, including bacterial growth). Carpets and drapes can trap dust and harbor harmful mildew or mold spores, and prolonged humidity like we get in New England can lead to “a biology experiment” in the basement or inside your walls.

Meanwhile, all kinds of behaviors can improve or worsen the air quality in your home. When you cook a big meal at home, for example, it releases tons of particulate pollution — temporarily putting the air in your kitchen on par with the smoggy atmosphere of Delhi, India. Running the range hood, if you have one, can exhaust most of that gunk before you breathe it.

Likewise, Hayward said it’s unwise to store cosmetic products — like perfume, deodorant, and moisturizers, whose fragrances and other ingredients can contain VOCs — in the bedroom, where our bodies are supposed to be resting and healing themselves for hours each day.

After talking with Hayward and receiving a dreadfully low grade on his Hayward Score home health test, we decided we’ll probably spring for an air purifier for our bedroom— although that can only do so much if you’ve got a severe air quality issue in the house, Hayward said. “It can solve small problems, but not big problems,” he said. Our conversation also inspired what will likely be my next two home improvement projects:

One last note: The more I talked to these experts and learned of the dangers lurking in our home, the more I grew appalled at the sometimes reckless way I’d approached DIY projects in the past. I’ve generally followed the basic precautions — always wearing goggles when using a table or circular saw, wearing a dust mask when sanding or wrecking stuff, and using a HEPA respirator when ripping up old flooring that may have had asbestos in the adhesive backing.

But given the age of our house, the potency of VOC vapors, and the dangers of dust kicked up during almost any type of demolition — which might contain lead, polyurethane, mold, and other nasties — I probably should have been using that HEPA respirator for a lot of other projects, too. The danger’s real, folks. Don’t huff your house if you don’t have to.

Here are some of your best choices when it comes to common construction materials, according to the Healthy Building Network’s HomeFree initiative: