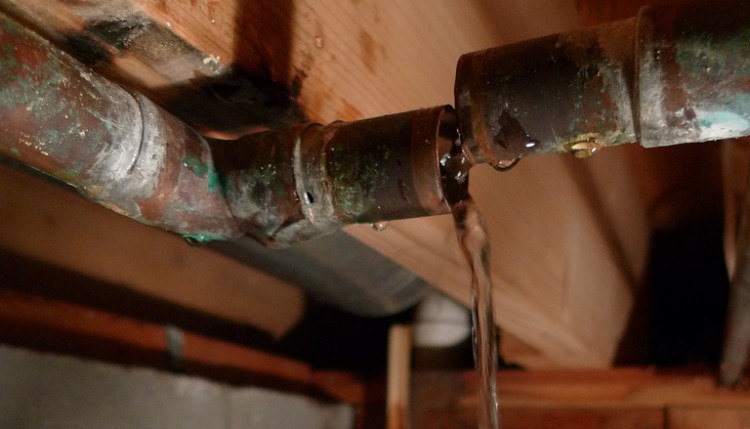 A friend of mine recently bought her first home, and it’s an old one. Real old. Like 200-year-old farmhouse old.

Now, as much as there is to love about an old house like that, you know you’re probably going to discover some unpleasant surprises — especially if you’re the first ones to update it in a long time.

And so they have. Lots of them. One in particular involved plumbing.

While she and her husband were repainting the laundry room and ripping out some unsavory late-20th-century flourishes, the washing machine broke. It was old anyway, so they bought a new one — except they discovered that the pipes back there were so rusty and corroded they couldn’t even detach the old washer.

So now, what was supposed to be a mere touch-up and paint job — they have plenty of other higher priority projects they want to get on with — is demanding their time, money, and attention. Do they replace the old pipes? All of them? Rip out the cabinets and wall, too? The room was supposed to be done already, and here they’re looking at days or weeks of extra work, not to mention the cost of a plumber.

All just to get this afterthought of a room back to what they thought they already had.

And that… that is frustrating. It happens when you’re working on an old house, with all its fragile systems and unknowns hidden behind benign-looking plaster walls. Suddenly you’re in an expensive mad dash just to get back to where you started.

When we got our ancient knob-and-tube electrical system updated to somewhat modern wiring, our electrician was hammering something in the attic when a pipe burst about 15 feet away from him. We had a steaming, gushing waterfall in our closet. Turns out we had old, brittle brass pipes carrying our hot water all the way up into the attic and then back down into the bathroom and kitchen — a preposterous setup from when they first separated the hot water for each unit I guess.

And so we had to change the next project on our list. Instead of “remodel kitchen soon” it became “replace brass pipes immediately!”

My friend ranted, “Plumbing is NOT sexy.” And it’s true: When you dream about owning a home, you’re thinking about paint colors and cabinets and furnishings and appliances, maybe replacement windows or a new circuit breaker… but unless you know something is wrong, you’re probably not daydreaming about plumbing upgrades.

It’s like getting a new roof: You pay $10,000 for it, but for all intents and purposes it looks exactly the same. It just functions better.

But that’s the thing — function is really, really important when it comes to a house. A leaky roof or burst pipe can wreak utter havoc on your house. And havoc isn’t really sexy, either.

I argued that plumbing IS kind of sexy, but as brand-new homeowners they don’t quite appreciate it yet — the way teenagers so often don’t realize that traits like intelligence or patience can be sexy. Because solid, updated plumbing means you’re all clear to pursue your bigger dreams without worry.

Of course, plumbing is sexy in some less philosophical ways as well. I mean, pipe fittings have “male” ends that screw into the “female” sockets: 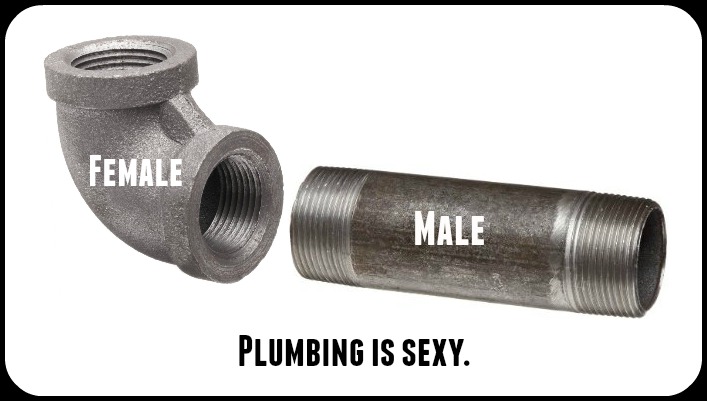 There are even pipe parts called “nipples” and “flanges,” to say nothing of “ball cocks.”

There are plenty of other plumbing terms that sound pretty dirty, too, if you tap your inner Wayne Campbell. Self-rimming sink? Stink pipe? Packing nut?

A plumber once told me in earnest that he had a guy on his team who “loves laying pipe.” I had to stifle a smirk.

But anyway, we’ve had a TON of plumbing fiascoes at our house — it’s a whole other post. We honestly might be our plumbers’ best customers. So to me, the sexiest plumbing of all is a faucet that runs freely and smoothly shuts all the way off — the kind that serves you well day in and day out, without asking for anything in return, and without worry. That is sexy.