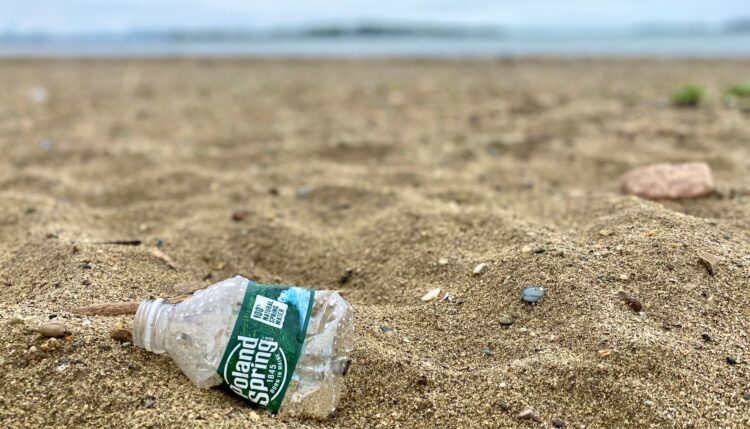 10 ways to use less plastic at home

I was listening to Alie Ward’s delightful + insightful Ologies podcast the other day — an older episode about ocean health with Dr. Ayana Elizabeth Johnson. There are a million reasons to listen, and to do more to help our marine ecology, but there was one startling statistic Dr. Johnson dropped that I hope will haunt you into action.

What do you think? Every year?

By the time you finish this sentence, another 2,000-plus pounds of Poland Spring bottles, milk jugs, and flimsy plastic bags will find their way into our oceans (and into the digestive tracts of birds and marine wildlife). At our current pace, the world’s oceans will contain more pounds of plastic than fish by 2050, according to World Economic Forum estimates.

I hope that horrifies you. I also hope it spurs you into action.

First things first: We as consumers and communities have been put in the impossible position of trying to address this massive, global problem from the very bottom of the production chain. This responsibility shouldn’t fall on you, as a consumer, nor on your town’s recycling department.

Companies around the world embraced plastic packaging because it was cheap and easy. When people started to worry about all that plastic waste piling up, the major oil companies — plastic is mostly petroleum, after all — convinced the public that it could simply be recycled, knowing full well, as early as 1974, that it couldn’t and wouldn’t be. Less than 10 percent of all the plastic ever made has been recycled, and most can only be recycled once or twice at best.

And yet, the burden has fallen upon us. You should be outraged about this. If you really want to do something about our plastic problem, apply public pressure to corporations and politicians. Manufacturers should take responsibility for their products and their packaging.

It’s not like they don’t know how: Coca-Cola, for example, distributed its soft drinks in millions of reusable (and even collectible) glass bottles for decades before embracing single-use plastic bottles. And until fairly recently, a lot of breweries did the same thing, collecting empty bottles from bars for reuse when they dropped off fresh cases of beer.

How to use less plastic at home

Until public pressure or the law compels companies to take responsibility for the life cycle of their products, it’s up to us to do what we can. So here are 10 simple ways to reduce plastic waste at home.

1. Go for glass (or aluminum, or cardboard).

Being a consumer is hard work, I know. But here’s a split-second decision you can make at the store: Given the choice between two products, if one is in a plastic tub, and the other is in a glass container, go for the good old fashioned glass.

Glass is made from sand, we’ve known how to recycle it for ages, and even when it’s not turned back into glass, it has other uses. When I spoke to a recycling plant manager last year, he said they recycle so much glass that the state uses it as filler in the asphalt when paving roads. That’s fine — it’s natural, it’ll break down.

Aluminum is a similarly smarter package choice — it’s a valuable material, so we’ve known how to recycle it for decades. And a lot of it does get recycled — over and over and over and over again, unlike plastic — with 75% of the aluminum ever produced still in circulation today. (It would be even higher if other states had bottle and can deposit laws similar to those found in Massachusetts and elsewhere.)

Opting for cardboard is another easy choice to make. You don’t need the eggs in styrofoam or plastic containers — go for the free-range eggs in the cardboard carton. Opt for the box of kitty litter, not the plastic jug.

Getting a half gallon of milk? That’s a tougher call, because you can’t recycle the cardboard milk container in your curbside bin — like a juice box, it has a thin plastic film inside (the stuff is frigging everywhere) to keep it fresh — but you could also choose neither and…

2. Bring back the milkman.

For the past year and a half, we’ve been getting locally made milk, cream, and other items delivered from Thatcher Farms once a week. We rinse out the glass milk and cream bottles when we’re through with them, and leave them out front for the delivery driver to collect each Saturday.

Aside from the benefits of supporting a local New England farm, this closed-loop system helped us keep over 100 milk and cream cartons out of the trash last year.

Like any kid, our daughter loves popsicles and those cheap Fla-Vor-Ice pops. On top of the fact that the ice pops are essentially just frozen sugar water and food coloring inside a plastic tube, they also leave a mind-boggling amount of plastic behind.

So a couple of summers ago, we bought a set of silicon ice pop molds (we got the Lekue ones, but these are a cheaper alternative), and I swear to God, they’ve been an absolute game-changer.

You can fill them with anything you want — organic juice, lemonade, yogurt, fruit smoothie, chocolate pudding — and they make perfect reusable frozen squeeze pops. Wash ’em on the top rack of the dishwasher and repeat.

I mean, it was a joke back in the ’80s when they first started bottling and charging people for water. Now it’s the most popular beverage on the market. Americans alone buy 1,500 plastic bottles of water every second, 80% of which aren’t recycled.

Bottled water — at least, in the scale and casual degree at which we now consume it — is an unequivocal environmental catastrophe. When we do beach cleanups, Poland Spring water bottles and their slim plastic bottle caps are, by far, the No. 1 offender. (Ok, No. 2, if you count cigarette butts.) And single-use plastic bottled water systems use between 11 and 90 times more energy than tap water systems, according to a lifecycle assessment by Dovetail Partners, an environmental think tank in Minneapolis.

If you live in the Boston area, much of which is served by the MWRA, your tap water is almost certainly as good or better than anything you’ll get in a plastic water bottle, for like 1/1000th of the price.

So get a simple steel or insulated water bottle. Fill it with tap water. Drink that, and refill it at a water fountain or refill station while you’re out and about. Invest in a Brita filter if you’re worried about water quality or old pipes (or simply like great tasting, refrigerated water).

5. Brew your own coffee — but good lord, don’t bring another K-Cup coffee maker into this world.

Brewing coffee at home isn’t just a great money-saving technique — it also helps cut down on plastic waste. While cardboard coffee cups are far, far, preferable to the styrofoam ones Dunkin has thankfully fazed out, they’re still generally not recyclable — because, like milk cartons, they’re lined with a bit of plastic. And those plastic lids don’t often make it to the recycling bin, let’s be honest.

Why bother with the expense and waste? It’s easy to brew perfect, rich, exceptional coffee at home and take it to go in an insulated mug like this one. The only byproducts of this great coffee (with free refills!) are a soggy paper filter and spent coffee grounds, both of which are 100% compostable. (If you want a recommendation, we love our Ninja coffeemaker.)

Whatever you do, just please, please don’t get a stupid K-Cup coffeemaker. One-cup Keurig brewers are convenient, sure. But they have propagated terrible crimes against humanity. For one thing, the coffee they make is largely awful. They should legally have to call it “coffee-flavored beverage.”

But the bigger problem is that those little plastic K-Cups are not recyclable, and until recently, they weren’t compostable or reusable, either. The K-Cups trashed in landfills to date could wrap around the earth TEN TIMES. If you already own a K-Cup brewer, invest in reusable pods that you can fill with your own coffee grounds.

6. Make your own seltzer and soda.

We drink a ton of seltzer in our house — like 2 liters a day. So we invested in a SodaStream, and I gotta tell you, it’s a pretty amazing little contraption.

For one thing, it doesn’t even plug in or use batteries — it’s purely mechanical. In this day and age, that’s a marvel in its own right.

But the beautiful thing is, we never run out of seltzer, even when we run out of seltzer. And instead of lugging home cases of cans or plastic bottles each week (which themselves had to be manufactured and shipped), we’ve used the same four refillable bottles over and over again for two years now.

When we finish a tank of CO2, we mail it back to SodaSense in a reusable box with a prepaid label, and they send us a new tank as soon as the label gets scanned by a mail carrier. (We keep a couple of extra canisters on hand so there’s never a gap in bubbles.)

7. Use bar soap and shampoo.

I don’t know when bottles of body wash became a thing, but as a grumpy old man, I’m here to tell you that in MY day, soap came in blocks, and we liked it! We loved it!

Seriously, just use a bar of soap. Why add another plastic bottle to the mix? (I recommend my cousin Shannon’s goat milk soap, which she and her husband make on their Groovy Goat Farm in Nova Scotia. It’s perfection.)

You can also get bars of shampoo now, eliminating another plastic bottle from your bathroom. Check out Unpacked Living, based in Beverly, Mass., for all kinds of plastic-free, sustainable health and beauty products.

Send your kid’s sandwich to school inside a reusable silicone sandwich bag (I swear by the Stasher ones — the pinch lock seal doesn’t wear out over time like some of the other brands we’ve tried) or a square Tupperware container.

Huh? Yup. One of my big homeowner regrets is replacing our old wooden windows with vinyl (plastic) ones, which will last 30 years if we’re lucky and then need to be replaced again. Old wood windows can last forever if properly restored and cared for, and can be made as efficient as new ones with some weatherstripping and a good storm window.

Duh. Single-use plastic shopping bags are a scourge on modern society and difficult to recycle (and even then, they’re only recycled once). Bring cloth bags when you shop, or reuse plastic ones. Every extra use is one less plastic bag that might end up stuck in a tree or in a turtle’s digestive tract.

It’s hard to go to zero waste. But less waste is entirely achievable. And another simple way to get there is by purchasing stuff in bulk and refilling one small glass or plastic container.

How much is a year of your life worth? How about four?